Fighting resumed between troops in the Democratic Republic of the Congo and M23 rebels in the country’s east on Friday, as the armed group said a ceasefire deal between African leaders “doesn’t really concern” them. 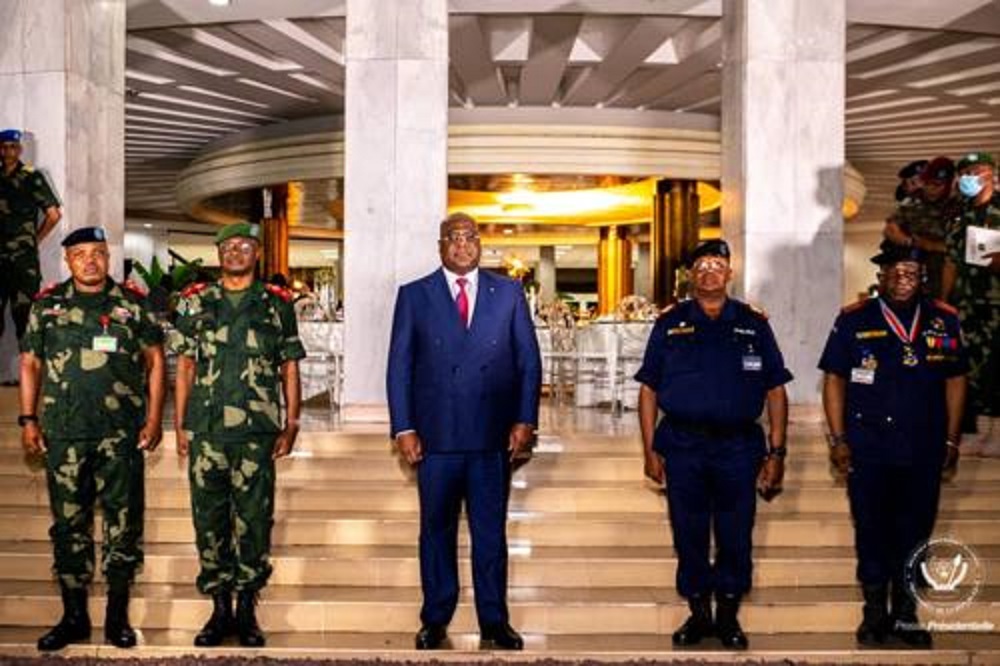 The FARDC senior officers with their supreme commander, Felix Tshisekedi, in middle of them.

Congolese government has rejected any direct talks with M23, while the armed group says it has no plans to withdraw.

Reporting from Kilimanyoka, outside Goma in eastern DRC, Al Jazeera’s Malcolm Webb said fighting is ongoing in the west of M23’s territory, around Chumba, Swagara and Bwiza. Military sources told Webb that M23 is “reinforcing, bringing in more fighters, more weapons” ahead of the 16:00GMT ceasefire deadline.

The M23 group is waging its most serious offensive in eastern DRC since 2012, further destabilising an area where multiple armed groups have wrangled over land and resources for decades.

The ceasefire deal brokered between African leaders in the Angolan capital Luanda on Wednesday called for the withdrawal of the rebels from “occupied zones” and their “withdrawal to their initial positions”.

But Lawrence Kanyuka, the political spokesman for M23, told the AFP news agency on Thursday that: “M23 has seen the document on social media … There was nobody in the summit [from M23] so it doesn’t really concern us … Normally when there is a ceasefire, it is between the two warring sides.”

According to Wednesday’s deal, if the rebels refuse to stop fighting, the east African regional force being deployed in Goma “will use force” to push them out.

Kenyan troops have arrived here in Goma, last few weeks, started clearing ground for their first military field post which is just north of the city of Goma … UN peacekeepers are also here.”

He said in absence of a ceasefire, people were waiting to see “if the presence of more foreign forces is going to prevent further advances by the armed group”.

Thousands have been displaced in recent weeks as DRC’s army has struggled to stop the M23’s advance. Many have sought refuge in and around Goma, some 20 kilometres (12 miles) from the front line, which the rebels briefly seized in 2012 before they were pushed back the following year.

On Thursday, hundreds also marched in Goma to protest against the ceasefire agreement, saying it does not tackle Rwanda’s alleged backing of the M23 group.

Demonstrators made their way through the city centre behind banners denouncing the international community’s “silence and ambiguity” towards mass killings organised “via Rwanda”.

“These accords and summits do not interest us. What interests us is peace and security,” civil society activist and protest leader John Banyene told the Reuters news agency.

The march ended at the French and British consulates, where Banyene read out a memorandum asking foreign powers to sanction Rwanda and Uganda for their alleged involvement with the M23.

“These people have already organised so many summits on the DRC that have not brought any solutions,” protester Placide Nzilamba told Reuters.

DRC accuses Rwanda of backing the M23, though Rwanda denies this. The United Nations in August said it had “solid evidence” that Rwandan troops had been fighting alongside the M23; the United States and European Union have called on Rwanda to stop backing the group.

The resurgence in fighting has caused a diplomatic rift between DRC and Rwanda. African leaders under the auspices of former Kenyan President Uhuru Kenyatta are mediating in the crisis.

Wednesday’s mini-summit in Luanda was attended by the DRC’s President Felix Tshisekedi and Rwandan Foreign Minister Vincent Biruta, but not Rwandan President Paul Kagame. There were no representatives from M23.

M23’s Kanyuka, speaking to AFP on Thursday, said the rebels had declared a “unilateral ceasefire” in April and believed it was still in force. “If tomorrow at 6:00pm (16:00GMT), or in the morning, the government doesn’t attack us, we will still be there,” he said, adding: otherwise, “we are defending ourselves”.

“We are always ready for a direct dialogue with the Congolese government to resolve the root causes of conflicts,” Kanyuka told AFP.

The government in Kinshasa has refused to engage with the M23 group, which it calls a “terrorist movement”, as long as it occupies territory in DRC.