The House oversight committee has released internal documents about the failed push for a census citizenship question by former President Donald Trump’s administration, including Wilbur Ross, the former commerce secretary who is shown at a White House meeting in 2018. Hansi Lo Wang 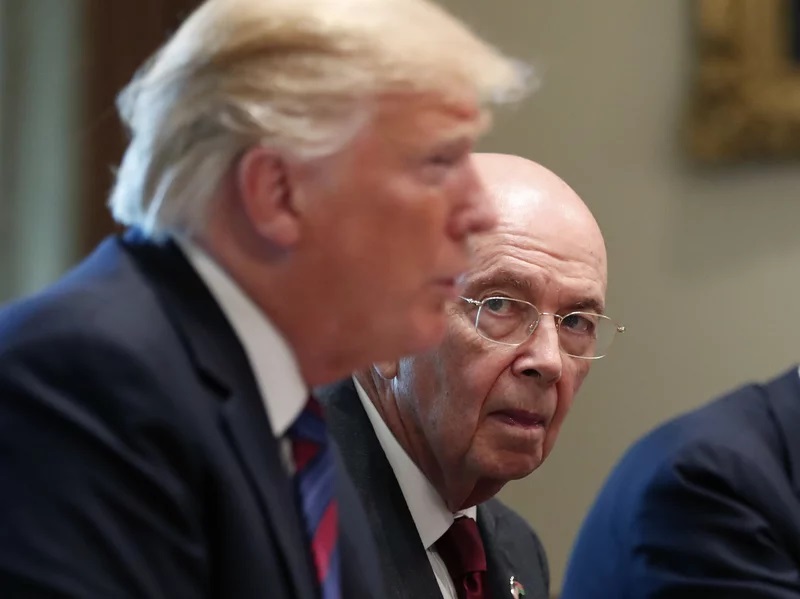 Former President Donald Trump’s administration spent years trying to add a census citizenship question as part of a secret strategy for altering the population numbers used to divide up seats in Congress and the Electoral College, internal documents released Wednesday by the House Oversight and Reform Committee confirm.

Long kept from the public, the Trump administration memos and emails were disclosed by lawmakers following a more than two-year legal fight that began after Trump officials refused to turn them over for a congressional investigation. Citing the « exceptional circumstances » of the case, the Biden administration, which inherited the lawsuit last year, agreed to allow House oversight committee members and their staff to review the documents.

The hotly contested question — « Is this a person a citizen of the United States ? » — ultimately did not end up on the 2020 census forms. In 2019, the Supreme Court blocked the Trump administration’s unprecedented efforts after finding its use of the Voting Rights Act as the stated reasoning for the question « seems to have been contrived, » as Chief Justice John Roberts wrote in the majority opinion.

Before Trump eventually released a presidential memo in 2020 calling for the unprecedented exclusion of unauthorized immigrants from a key set of census numbers, earlier releases of internal documents and public statements by Trump officials signaled their interest in using citizenship data to try to break with more than two centuries of precedent in how congressional seats and Electoral College votes are redistributed among the states.

Still, the newly disclosed documents provide a detailed look into some of the early behind-the-scenes discussions at a time when Trump officials were focused on keeping their plans under wraps.

The documents’ release, along with a new report by the House oversight committee, comes as Congress considers a House bill that could help shield upcoming national head counts from the kind of interference that saddled the 2020 census during the Trump administration.

« Today’s Committee memo pulls back the curtain on this shameful conduct and shows clearly how the Trump Administration secretly tried to manipulate the census for political gain while lying to the public and Congress about their goals, » says Democratic Rep. Carolyn Maloney of New York, who chairs the House oversight committee and introduced the bill, in a statement. « It is clear that legislative reforms are needed to prevent any future illegal or unconstitutional efforts to interfere with the census and chip away at our democracy. »

A memo focused on congressional apportionment Multiple drafts of a newly released memo from 2017 show that in the months before the March 2018 announcement of then-Commerce Secretary Wilbur Ross’ decision to add a citizenship question, Trump officials were particularly focused on who specifically should be included in the census numbers used to reapportion congressional seats and electoral votes among the states once a decade.

Both U.S. citizens and noncitizens, regardless of their immigration status, have been part of those official numbers since the country’s first national head count in 1790. Despite the 14th Amendment’s requirement to include the “whole number of persons in each state,” however, Trump officials were searching for a way to exclude unauthorized immigrants.

In the version of the memo presented in August 2017 to Ross, who oversaw the Census Bureau, a key section referring to the Constitution’s instructions for divvying up congressional seats is titled: « The Apportionment Clauses Do Not Address the Exclusion of Noncitizens or Illegal Aliens From the Population When Apportioning United States Representatives. »

Then-Commerce Department attorney James Uthmeier wrote the memo at the request of Earl Comstock, another Trump appointee who was under pressure from Ross to figure out how to get a citizenship question onto the 2020 census forms.

An earlier draft by Uthmeier appeared to be skeptical of the administration’s ambitions. « Over two hundred years of precedent, along with substantially convincing historical and textual arguments suggest that citizenship data likely cannot be used for purposes of apportioning representatives, » wrote Uthmeier, who is now chief of staff to Florida’s Republican Gov. Ron DeSantis.

But after multiple revisions following Comstock’s feedback, the revised memo sent to Ross claimed, without citing any evidence, that « there are bases for legal arguments that the Founding Fathers intended for the apportionment count to be based on legal inhabitants. »

In an email sharing that revised memo with another Trump appointee in the Commerce Department, Uthmeier noted: « Feel free to let me know if this is sugar coating the analysis too much. »

In fall 2017, Uthmeier hand-delivered the memo and a handwritten cover note to John Gore, a Trump appointee at the Justice Department who ghostwrote a letter that Ross used to publicly justify his decision to add a citizenship question.

Ross repeatedly testified in Congress that his decision to add the question was in response « solely » to that Justice Department letter, which requested more detailed U.S. citizenship data that could be used to enforce Voting Rights Act protections for racial and language minorities.

But the handwritten note obtained by the House oversight committee shows that Ross helped to orchestrate that DOJ request. « Sec Ross has reviewed concerns and thinks DOJ would have a legitimate use of data for VRA purposes, » Uthmeier wrote to Gore by hand.

Months before the DOJ submitted its request in December 2017, Uthmeier also followed up on a request from Ross by researching which states have used citizenship data in redistricting for Voting Rights Act enforcement, according to emails from September 2017.

One of those emails emphasized that the work should be kept quiet.

« Ultimately, everyone is in agreement with our approach to move slowly, carefully, and deliberately so as to not expose us to litigation risk, » Uthmeier wrote to Comstock and other Trump appointees at the Commerce Department, adding that they were « not yet discussing our analysis with outside parties that may take our discussions public. »