OPINION: Xenophobic SA goes against Pan-Africanist agenda that liberated us – .

The emergence of groups such as Operation Dudula, which spreads hatred on social media, is reminiscent of the anti-Tutsi propaganda that Hutus spread through radio in Rwanda before and during the genocide, writes the author. (Photo by Gallo Images/Papi Morake) 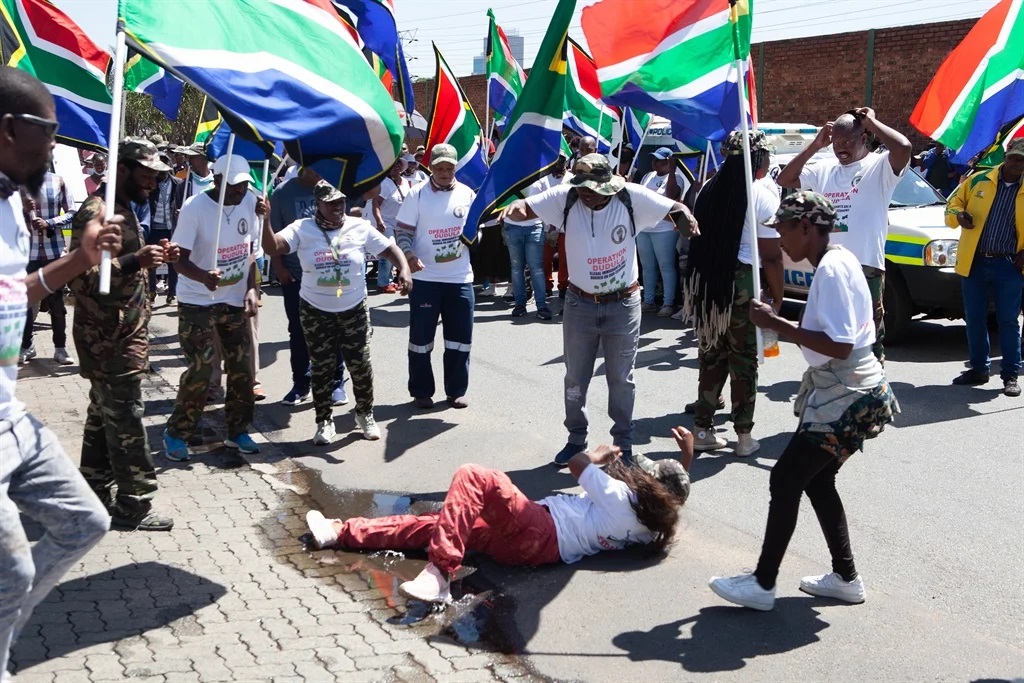 The xenophobic South Africa we find ourselves in today is a huge betrayal of the work and sacrifices of leaders such as Ghanian leader and scholar Kwame Nkrumah and the citizens who backed his dreams of a united and liberated Africa, writes Nombulelo Shange.

South Africa’s democracy might not have existed today without the sacrifices and support of African states and their citizens, who supported the Pan-Africanist ideals of a free and united Africa. Ideals that were pushed by the then Organisation of African Unity (OAU), later named the African Union (AU).

Africa Day is a celebration of the formation of the AU, which was founded on 25 May 1963. The political and financial support that the OAU extended to South Africans resisting apartheid differed with the changing tides of the struggle.

When the apartheid police were violently crushing student resistance in the 1970s, many fled to different African countries, where the OAU funded their stay. They did the same to support the rise of the armed struggle; uMkhonto weSizwe soldiers were assisted by the OAU, especially when it came to living expenses while in exile. They also threw a lot of their efforts into international lobbying for the liberation of South Africa.

Influential figure in the formation of the OAU, post-independence Ghanian leader and scholar Kwame Nkrumah, said:

The independence of Ghana is meaningless unless it is linked up with the total liberation of the continent.

The OAU maintained this outlook for decades, with South Africa being one of the last African states to gain freedom in 1994, where most gained their freedom from colonial rule between the 1950s and 1970s. There is a long history of how the OAU and various African states fought for our freedom as black South Africans, a history so long that this brief overview does not even begin to illustrate the depth of the solidarity we received from different African countries.

The xenophobic South Africa we find ourselves in today is a huge betrayal of the work and sacrifices of leaders such as Nkrumah and the citizens who backed his dreams of a united and liberated Africa. The colonial governments left many social challenges, and it was not uncommon for them to purposefully destroy infrastructure as they left the colonies. Citizens would have been justified in demanding that the OAU direct its resources and attention solely to the rebuilding of independent African states rather than supporting the anti-apartheid resistance.

The even bigger betrayal within xenophobic South Africa is that we maintain the colonial borders that were drawn up in the scramble for Africa while the West was determining our value based on the mineral wealth in our land and our importance only as free or cheap labour.

When we fight for a South Africa that exists in silos from the rest of the African continent and question the mobility that once existed before the drawing up of colonial borders, then we allow the goals of our colonisers to continue to live and encumber us. We halt the much-needed free flow of life-affirming and possibly lifesaving ideas between us and our neighbours to tackle the many social ills that colonialism has left us with. When we maintain these decisions that were constructed to keep us oppressed and reliant on the West, we strengthen the legacy built on our oppression.

A lot of our resistance to ’outsiders’ coming in is almost always directed at African immigrants, and this is a betrayal of our own identity and sense of self. It shows the deep self-hate that we as black South Africans carry with us and maintains the ’better black’ narrative usually enforced by whiteness.

Black children raised within the racist cultural assumptions of the colonial system, can partially resolve the tension between contempt for blackness and their own dark skins by coming to think of themselves, in some sense, as white.

So, if you do not fit these categorisations, you are seen as dangerous, unsophisticated, ugly, or uneducated. You mirror the false stereotypical ideals of blackness or the blackness we have been taught to run from or conceal. African immigrants coming into South Africa tend to be perceived as not ’white adject’ enough and end up being victimised on those and other grounds. Another dangerous dimension is ’tribalism’ – if you can’t or don’t adequately assimilate to South African culture or speak the languages because you are an ’outsider’, then you are victimised or further excluded.

Drawing comparisons between xenophobic South Africa and the Rwandan genocide

The Rwandan genocide is one of the most dangerous illustrations of what happens when these two systems of oppression come together. The genocide took place in 1994; within a few months, the conflict claimed the lives of 800 000 Tutsis who were killed by the Hutus. Many issues sparked the genocide – ’tribalism’ and the desire to be ’white adjacent’ were just some of the reasons. The Tutsis were the favoured minority by the Belgium colonial government.

When Rwanda gained its independence, the Belgium government transferred much of the political and economic power to the Tutsis because they were believed to be closer to whiteness and therefore superior to the Hutus. Vulgar racism classifications, which were considered scientific knowledge, were used to draw this conclusion. The Tutsis were seen as having more Western features, such as sharper, smaller noses, being taller, etc. Rwandans internalised these oppressive classifications and it created tensions that eventually sparked the genocide.

South Africa’s frequent violent xenophobic outbursts are not too far removed from the Rwandan history. The emergence of violent groups such as Operation Dudula, which spreads hatred on social media, is reminiscent of the anti-Tutsi propaganda that Hutus spread through radio in Rwanda before and during the genocide. Superficial categorisations such as skin colour are usually used to determine who is South African and who is not.

Often South Africans end up also being attacked in the process, because the idea that South Africans do not have dark hues is a false social construct. Like Rwandans, we are uncritical of dangerous black constructs created by whiteness. And like the Hutus, we scapegoat the challenges created by colonialism and apartheid and which our government fails to adequately address. We blame our poverty, rising unemployment, and other social ills on African immigrants, who are also experiencing dehumanising abuses in workplaces that see them as easily disposable, while also navigating a violently xenophobic South Africa.

This goes against the Pan-Africanist dreams of important leaders like Nkrumah, while distracting us from the problems that really matter, such as land, the economy, access to dignified work, health care, education, etc. These structures are still largely owned or controlled by white beneficiaries of colonialism and apartheid in South Africa.

So, while we attack African immigrants for low-skilled work and opportunities that are not enough to go around even without the presence of immigrants, patriarchal whiteness maintains its dominance and control over our land, economy, and our sense of self.