UK: For Migrants Entering Britain, All Roads Lead to Rwanda no Matter Who Emerges Prime .

Sunak also pledged to end what he called the « farce » of housing migrants in hotels. In February 2022, it was reported in the British press, including by the BBC, that 37,000 migrants were being housed in hotels at a cost of £4.7 million per day. Nigeria broad 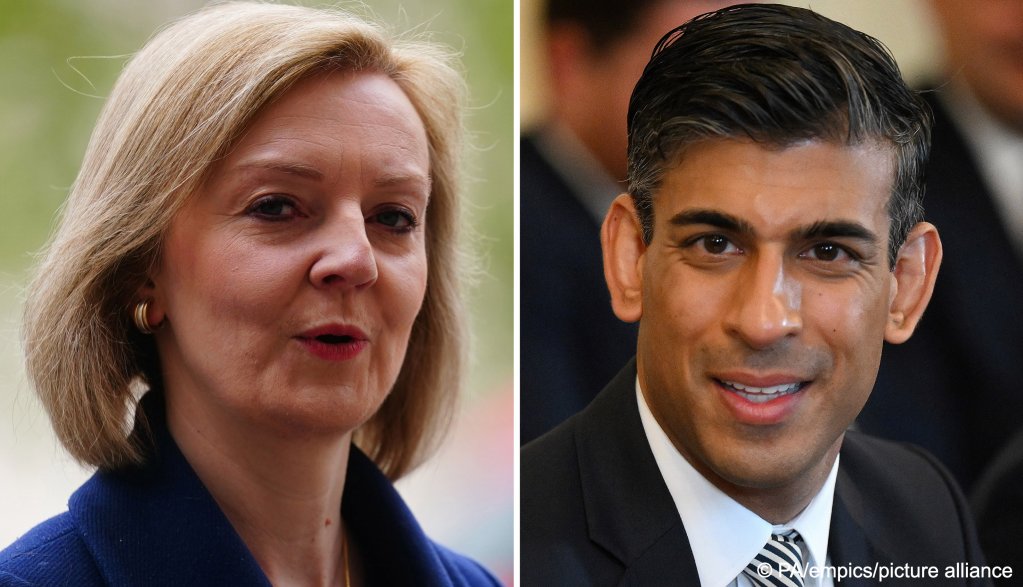 In September the ruling British Conservative party will elect its new prime minister. The two remaining contenders in the race, Liz Truss and Rishi Sunak, have both promised to continue the government’s tough stance on immigration and keep the Rwanda asylum deal in place.

In the race to replace outgoing British Prime Minister Boris Johnson, the two remaining Convservative Party contenders — Liz Truss and Rishi Sunak — have both promised to maintain the tough stance on immigration that Johnson’s government upheld.

The two candidates are taking part in a series of televised debates on July 25, August 31 and on August 4. Ahead of the first of these debates, Truss and Sunak have been busy on their social media channels communicating their intended policies.

On July 24, Liz Truss tweeted that she « pledged to introduce tough measures to deter illegal Channel Crossings. » These included « expand[ing] the Rwanda policy, » and adding more countries, « [r]einforc[ing] border force with more staff, » and not « cower[ing] to the ECHR [European Court for Human Rights] ». She wants to ensure that the immigration policy « works for Britain, » Truss explained in her « Liz for Leader » campaign.

The tweet included a link to an article on the right-wing newspaper the Mail on Sunday. In it, the paper commented that Truss vowed « to implement a hard line on immigration if she wins the keys to Number 10 [UK Prime Minister’s Office].»

Truss pledged to increase « frontline border staff by 20% » as well as searching for more countries that might be willing to take asylum seekers who wanted to come to Britain. A strengthened bill of rights, said Truss, would also help give the UK a « sound legal basis » by which to address “illegal immigration,” reported the Mail.

Truss added that one of her priorities would be to « sort » the numbers of people crossing the Channel towards Britain. This year, the numbers have already exceeded 15,000. « Britain’s borders will be protected under my leadership and I will do what it takes to make the Rwanda deal fully implemented and also look to other arrangements with other countries, » Truss said according to the Mail.

According to reports, Truss also intends to tighten the definition of who qualifies for asylum in Britain and to set an annual cap of refugees that the UK would accept. If countries were deemed as failing to cooperate on migrant return policies, then Truss promised to withhold development aid to those countries.

Rishi Sunak, Britain’s former chancellor under Boris Johnson, who resigned a few weeks ago, said he would be holding « the French to account with clear targets for stopping boats, » reported the Mail.

In multiple posts on Twitter on July 24, Sunak outlined his « ten-point immigration plan. » He said that he believed there is « absolutely nothing racist about wanting Britain to have secure borders that work.»

These ten points included, « reforming our broken asylum laws, — including tightening the definition of who qualifies for asylum in the UK » and « giving primacy to the Refugee Convention over the more expansive ECHR interpretation. » He said he would give the authorities « powers to detain, tag and monitor illegal migrants. »

Sunak also said that he would make sure Parliament had control over who comes to the UK by setting up an annual cap on the number of refugees to be accepted by safe and legal routes. This would be « amendable in the face of emergencies, » he said.

The grandson of migrants himself, Sunak said that he would implement a « new cross-government Small Boats Taskforce, — drawing on military expertise and working with the NCA [National Crime Agency] and UK intelligence capabilities. »

This task force would be expected to « coordinate the response to every step of an illegal migrant’s journey — from the upstream operations of smuggling gangs to detention in the UK. »

In 2020, Home Secretary Priti Patel already appointed a former military officer to be the « Clandestine Channel Threat Commander. » The current government has also asked the British Navy to work alongside Border Force and the Coast guard and Royal National Lifeboat Institute (RNLI) to help when migrant boats arrive in British waters.

Sunak also pledged to end what he called the « farce » of housing migrants in hotels.

In February 2022, it was reported in the British press, including by the BBC, that 37,000 migrants were being housed in hotels at a cost of £4.7 million per day. In January 2022, the Daily Mail reported that some migrants were staying in « four-star accommodation at a cost of at least £125 per night. »

Sunak echoed what the current Home Secretary (interior minister) Priti Patel has been saying for several years now: that the current immigration system in the UK is « broken. » Sunak said he would make Patel’s Rwanda policy really work, « doing whatever it takes to get our partnership off the ground and operating at scale. » He, like Truss, said he would pursue additional « migration partnerships.»

Strengthening immigration enforcement was another Sunak’s promise. These would include « increasing resources for more raids and site visits, with tougher fines and custodial sentences for those exploiting illegal labor.»

Sunak said that he believed migration should be « legal and controlled. » According to the Mail, Sunak said that « right now the system is chaotic, with law-abiding citizens seeing boats full of illegal immigrants coming from the safe country of France, with our sailors and coastguards seemingly powerless to stop them. It must stop and if I am Prime Minister it will stop.» He said he would « hold the French to account, » setting them « clear targets for stopping boats.»

The government’s processing facilities for migrants crossing the Channel were heavily criticized by the Chief Borders Inspector David Neal. The government responded last week, after the report was published, that it had implemented all the findings recommended in the report. A follow-up visit is expected from the inspectors, although no date has yet been confirmed.

Like Truss, Sunak too promised that he would make sure that anyone who was denied asylum and foreign criminals would be « sent back home. »

Britain is currently running a fairly large backlog on its processing of asylum cases. In part, this was made worse by the additional hurdles written in to the new Nationality and Borders Law, asylum lawyers like Colin Yeo of the Free Movement website say.

Sunak said he would set a target that « 80% of claims are resolved within six months of being lodged.» For that, he promised « more case workers, incentives, simplified guidance, and better use of technology.»

Lastly, he promised that he would commission someone to « look at more fundamental Home Office and Border Force reform. »

That is why, wrote the Guardian in an analysis of the leadership race, both candidates were busy tossing so-called « red meat policies » to the members, by serving up « hardline policies… in a bid to whet appetites and boost support. »

Charities that work in immigration have criticized the candidates’ approach. Sam Nadel, head of Government Relations at Oxfam, commented on Twitter that the « announcements today from leadership candidates on refugees are a reminder the heat of campaigning leads to bad policy. » Nadel called for « more aid and safe and legal routes to the UK.»

The Guardian commented that once one of these candidates becomes prime minister, their policies are liable to change again, when instead of just Conservative Party members, they have to win over voters. Some members of the Conservative party themselves have also expressed unease about some of the current policies, including flying asylum seekers to Rwanda.

Meanwhile, the Mail reported that Rwanda had recently conceded that it only has capacity to house 200 migrants from the UK, although it added this could be « scaled up quickly » once the UK was willing to send people.

The Rwanda policy was criticized by a Home Affairs Select Committee report last week and is still to face a judicial review, in which it could be ruled unlawful.

According to the Mail, if it were to be found unlawful, Britain may still be contracted to pay Rwanda the £120 million it promised. Rwanda also admitted that there would be nothing to stop migrants flown to Rwanda subsequently leaving the country and attempting to reach the UK once more.