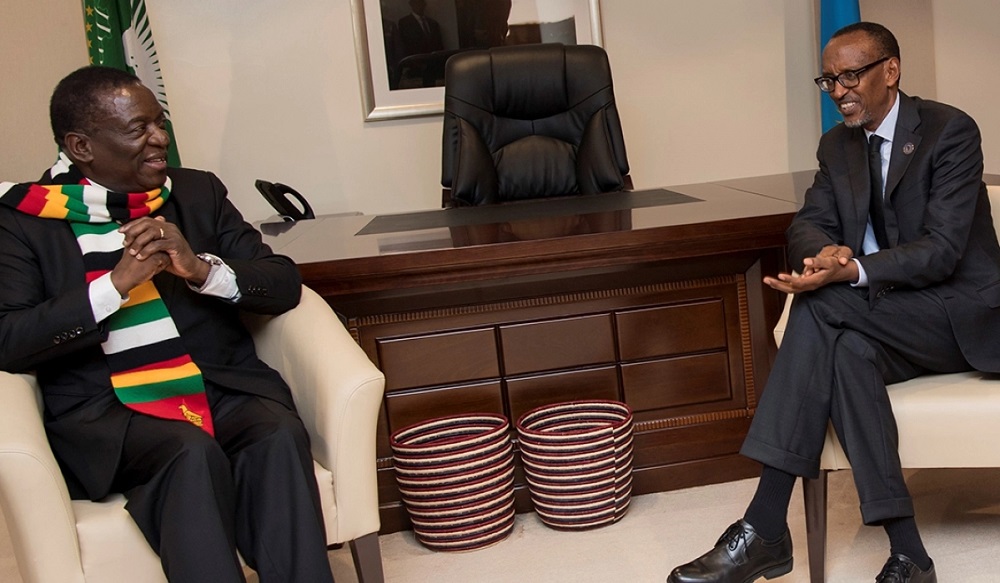 President Kagame meets President Emmerson Mnangagwa of Zimbabwe on the sidelines of the 10th Extraordinary Summit of the African Union in Kigali, March 21, 2018. Photoby Village Urugwiro

The programme is aimed to transform the livelihoods of the rural population in the Southern African country.

Mnangagwa said Kagame will attend the unveiling of the rural electrification programme at the end of this month.

Mnangagwa told supporters of his ruling Zanu PF political party in Chiredzi, South-East of Harare, that the programme feeds into his government’s rural development agenda, which encompasses the creation of smart homes equipped with clean energy, portable water and nutrition gardens.

« We have a programme which is coming at the end of this month. President Kagame of Rwanda is visiting us for this occasion, » the Zimbabwean President told a bumper crowd at the Zanu PF Thank you rally.

« This is after I spoke to him to say, fellow brother, our country Zimbabwe is under sanctions but we have a programme to ensure everyone has access to electricity wherever they are. President Kagame then spoke to his friends and he secured US$800 million. So that’s the facility he is coming to launch. »

Mnangagwa said, very soon, every Zimbabwean will have electricity regardless of where they are.

« If you go to Rwanda and see what President Kagame has done in the villages, it is well organised. Over there (in Rwanda) they work in unity with government assistance. That way, there is no family which is left behind because every household is assisted out of poverty.

« There is a shortage of electricity in the country and the Sadc (Southern African Development Community) region. In our case, it is mainly because of the economic growth we have experienced in recent years, » added Mnangagwa.