DRC – KENYA: Ruto For Sustainable Peace in The DRC or to The Rescue of Tshisekedi

The DRC’s president met with his Kenyan counterpart Monday in Kinshasa to discuss security in the country and the region, before meeting later this week with the president of Rwanda about rebel activity causing tension between the neighboring nations. By Mohammed Yusuf 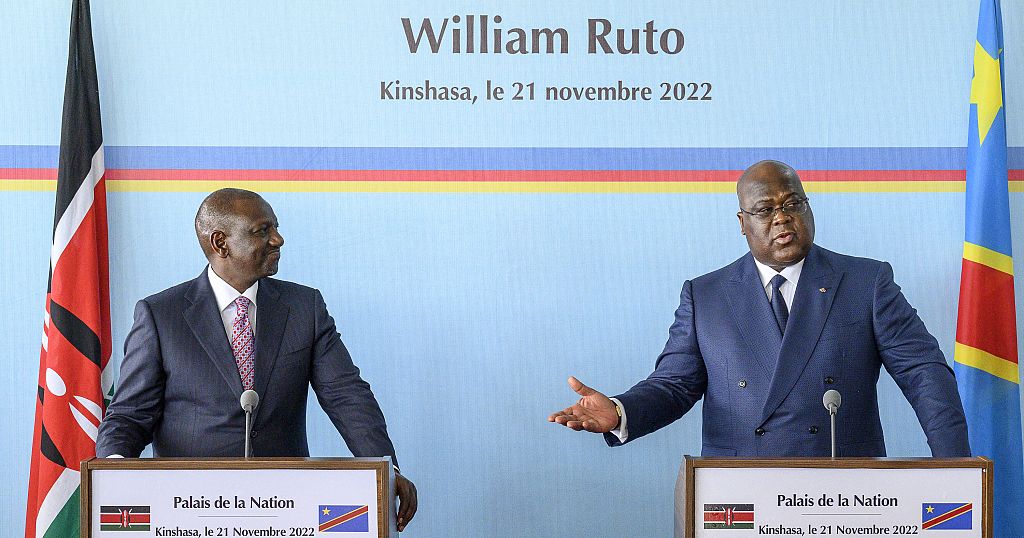 The two leaders, Felix Tshisekedi and Kenyan President William Ruto, met a week after Kenya sent some 100 troops as part of the East African regional force to eastern Congo to quell the violence and disarm the rebels operating in the area.

« We are committed under the East African Community to do whatever it takes to support his excellency, the president, to support the government of DRC and the people of DRC so that we can have peace in this country, » Ruto said. « It’s in our interest, collectively and individually, that we have a peaceful region.»

There are peace talks planned in Angola’s capital where President Tshisekedi is expected to meet Rwandan President Paul Kagame after months of tension between the two neighbors over the rebellious activities in eastern Congo.

Kinshasa accuses Rwanda of supporting the M23 rebel group against its forces, a claim denied by Kigali.

Planned talks in Nairobi between the Congolese government and the rebel groups that were scheduled for Monday have been postponed.

Blaise Karege, an independent political and security researcher in eastern Congo, said the success of talks between Kinshasa and Kigali can help ease tensions in the eastern part of the country.

The resurgence of the rebel group M23 has threatened the peace in eastern Congo and displaced thousands in recent weeks.

There is an ethnic component to the fighting in North Kivu. M23 is made up mainly of Tutsis and has accused the Congo government of failing to protect their families against other rebel groups in the region led by Hutus.

The group has vowed to continue fighting until they are assured of their safety against other rebel groups and the Congolese army.

Joel Baraka is a conflict and resolution researcher at the Pole Institute, a Congolese think tank. He said the president’s policy throughout has been not to engage any talks with rebel groups in the country.

« Many countries would like to see dialogue. They have a lot of interest in Congo, they have companies... and they don’t like to see conflict, » he said in Swahili. « For the president there is an upcoming election, and he wants to keep his promise. He has a lot of fears that if he speaks to the rebels, he can lose credibility among the Congolese people. »

The East Africa regional bloc has agreed to send thousands of troops to help Congo establish and maintain peace. In recent months there have been planned street demonstrations against the presence of United Nations peacekeeping troops and other forces in Congo for failing to protect civilians.