The DRC has launched an investigation after the UN peacekeeping mission in the country, MONUSCO, admitted that its troops killed two people in a shootout in a town in Beni territory on the border with Uganda, local authorities said Sunday. By James Tasamba and Aurore Bonny 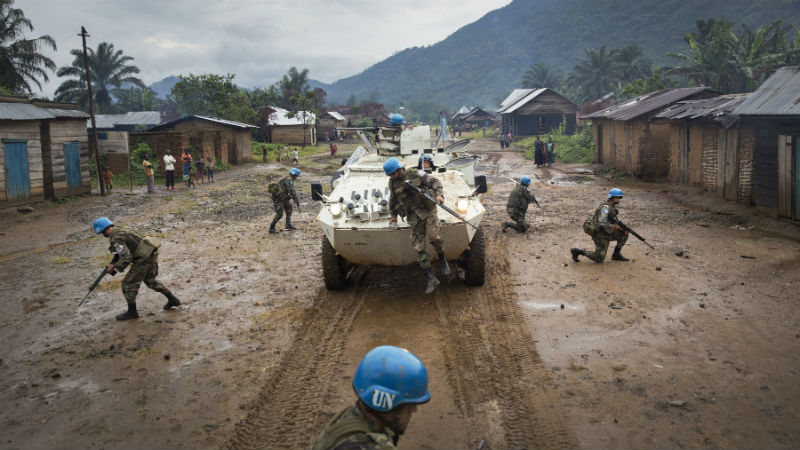 Congolese frustrated by an endless cycle of violence, lost faith in UN troops

« Two compatriots died and 15 were wounded following shots fired by peacekeepers from a contingent of the MONUSCO intervention brigade from Uganda, » said Patrick Muyaya Katembwe, the DRC’s minister in charge of communication and media and government spokesman.

He announced the opening of a joint investigation with MONUSCO to establish responsibility for the incident and learn the motivation behind it and to impose severe sanctions against the peacekeepers involved.

Katembwe said they are already under arrest, stressing that they can no longer be part of the contingents of the UN mission pending the outcome of a plan to withdraw MONUSCO from the DRC.

In a statement, Bintou Keita, head of the mission, said she had learned with deep shock about the grave incident, which happened Sunday morning.

« During this incident, soldiers of the Intervention Brigade of the MONUSCO force, returning from leave, opened fire at the border crossing for unexplained reasons and forced their way through. This serious incident resulted in loss of life and serious injuries, » she said.

Footage of the incident posted on social media showed uniformed men advancing towards an immobilized UN convoy behind a closed barrier in the town of Kasindi in eastern DR Congo’s Beni territory on the border with Uganda.

After a verbal exchange, the peacekeepers appear to have opened fire before opening the gate. They drove on and continued to shoot, scattering residents.

« The perpetrators of the shooting have been identified and arrested pending the conclusions of the investigation that has already begun in collaboration with the Congolese authorities, » added Keita.

The incident came days after demonstrations in several towns in eastern Congo’s North Kivu province demanding the departure of the UN mission, protests which claimed the lives of 19 people, including three peacekeepers.

Jean-Pierre Lacroix, the UN under-secretary-general for peace operations, visited Congo on Saturday, where he held talks with Congolese authorities aimed at avoiding a recurrence of the tragic incidents.

The UN mission in Congo is facing criticism for its perceived ineffectiveness at stopping fighting in the volatile east.