We learn how Rwanda is proving to be the premier source of quality tea leaves. Rwanda has a high quality of tea compared to other tea factories in the region, thanks to our high altitude,” says Michael Muhumuza, Marketing Manager of Rwanda Mountain Tea. Source Business Focuss 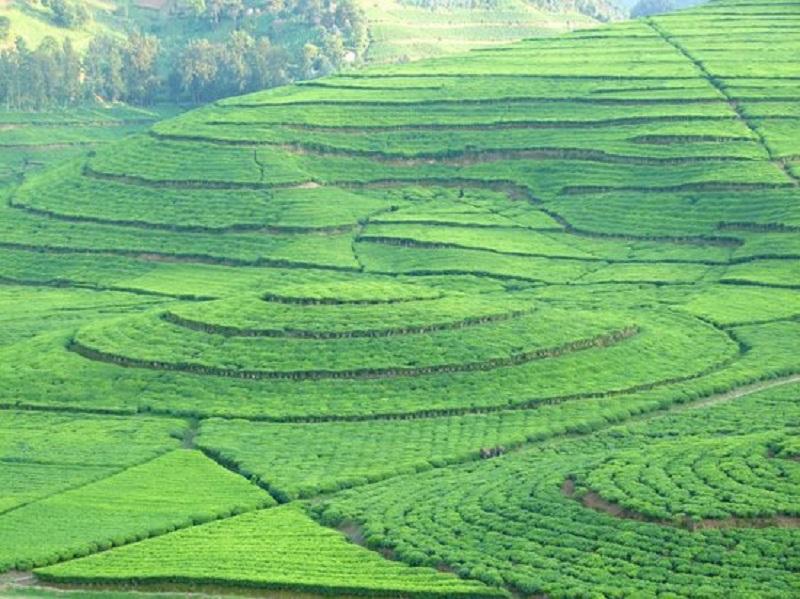 The famous Mombasa Tea Auction, run by the East Africa Tea Trade Association, is the biggest in the world, based in Kenya, the world’s biggest exporter of tea. Every tea company in Africa sends its produce there. And yet it is Rwanda Mountain Tea that will typically sell the highest or second-highest volume of tea there.

In general, Rwanda has a high quality of tea compared to other tea factories in the region, thanks to our high altitude,” says Michael Muhumuza, Marketing Manager of Rwanda Mountain Tea. “We are known as the country of a thousand hills. Most of our tea factories are between 1,500 and 2,000 feet above sea level.”

The company’s slogan is “Where quality makes a difference,” and it is not hard to see the difference it has made. When Muhumuza joined the company 11 years ago, 97% of Rwanda Mountain Tea’s produce was going to auction.

Today the company’s biggest buyers are from the UK. It is in many ways a preferable business model. At auction even if the tea is high quality, an auction can sometimes lead to a low price.

“With private direct sales, you can talk to customers directly, send samples, then have a direct discussion about how much the tea is worth,” Muhumuza points out. “We usually get a bit higher than the auction and can put the price up if we are facing challenges such as low volumes.”

One of Rwanda Mountain Tea’s biggest customers in the UK is Taylors of Harrogate, the firm behind the Yorkshire Tea brand, both at auction and directly.

“As time went by and they saw our quality was consistent, they started to buy more and more,” Muhumuza says. “We have started selling contracts to guarantee the buyer 50 tons a month.” 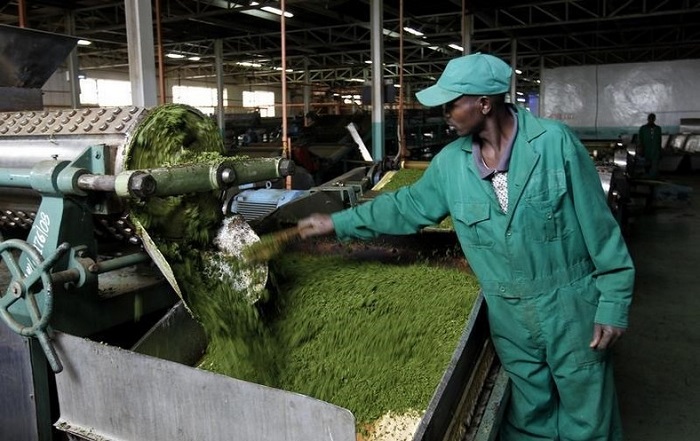 Of course, maintaining that level of quality is a challenge, and there is no room for error.

“Our biggest challenge is maintaining that quality,” Muhumuza tells us. “In the tea industry, we have found most of the buyers of tea go by the reputation of the tea. If your quality falls the buyers will immediately say the quality has been downgraded and stop buying it and it takes a very long time to build that back up. I work in marketing and sales; our selling point is our quality so that is very important.”

To maintain the level of quality that has informed Rwanda Mountain Tea’s reputation, you need to start at the beginning.

This means ensuring pluckers are well incentivised and trained, while building schools, clinics, and daycare centres to support their communities. Plucking is done early in the day, and then leaves are transported to the factory and processed, all within the space of 18 to 24 hours.

“We have to make sure they pluck properly and transport the leaves properly. If the road is bad and they are in a tractor shaking a bit to crush the leaves, drying up the water in them and making the leaves dry,” Muhumuza warns us. “Once the whole process is complete, the tea is put in sacks, those sacks are put in containers, which go to Kigali once they leave the factory. There we prepare the documentation needed to process it. That is where we come in. We will get the truck, do the paperwork, and give it back to the driver.”

Leaves are not just transported in bulk, however. At every stage of the tea supply chain, the most important question, naturally, is one of taste. 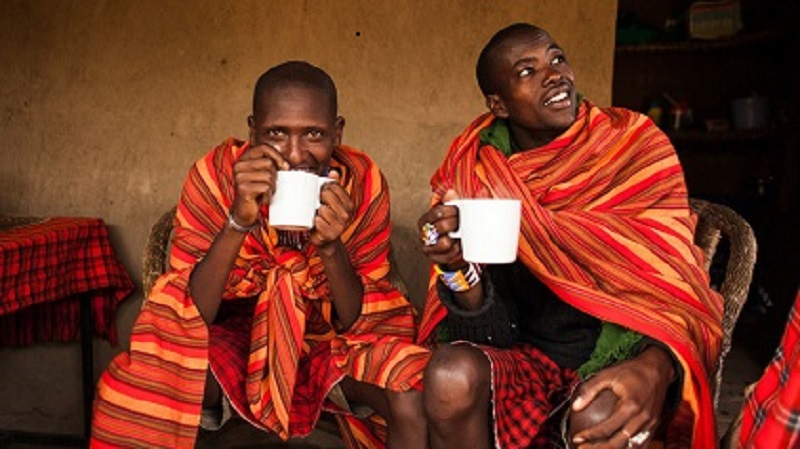 A Matter of Taste

“We use samples for everything. No tea is ever bought without the buyer tasting the tea. Even in the office, we have samples everywhere,” Muhumuza says. “We keep them for reference and have tasters at the factory and in Kigali. I have done a bit of tasting myself, but I am no match for our real specialists.”

Before Rwanda’s tea industry was privatised in 2005, the company did not have an abundance of experts in tea tasting. Building up that talent pool has taken investment.

“We bring people in to train from Kenya, which has been in tea for 100 years and is the biggest exporter in the world,” Muhumuza says. “That is how we trained people in the factories originally, but now they have done that for so long that we have our experts going to train people in different places. We send them to Mombasa to taste different teas, just in general to get an idea of what the difference in taste is. Most of our tasters are young people, with the highest-scoring guys from universities here in Rwanda. We bring them in and train them when they finish school.”

Talent is not the only area where Rwanda Mountain Tea is growing. The firm manages eight tea factories across Rwanda, and over the last ten years, the company has seen a great deal of growth.

“When I started, we managed five factories, three of them ours and two of them shared with an Indian company, Jay Shree Tea,” Muhumuza tells us. “We have built two more factories from scratch and acquired an eighth this year in August.”

Rwanda has had tea factories since the 1950s and 60s, but until recently the industry was nationalised. In 2005 the government decided to privatise the tea sector, selling tea factories to shareholders and private companies.

“In 2020 we completely bought out the two tea companies we owned with Jay Shree Tea, so now we own all of our tea factories, even though we manage them,” Muhumuza explains.

As the company has expanded, so has demand, and the market has fundamentally changed as Rwanda has become a global contender in the tea industry.

“We have expanded quite a bit, and like I said, in terms of buying tea factories in Rwanda that is not a possibility anymore. People have seen the high quality of the tea Rwanda produces and the money they make. Nobody is looking to sell,” Muhumuza points out. “I would say now the only thing left is building, which we have done. We have built two factories from scratch, and if we want to continue to expand, I think the government would have to allow us to build more.” 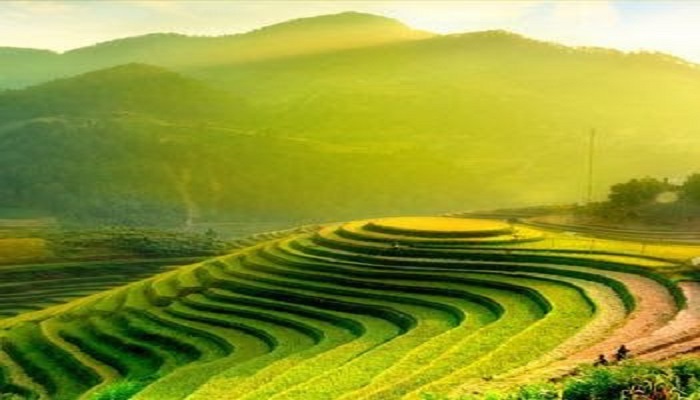 “We have investigated buying tea factories in other countries. Kenya knows the value of tea, they will not be selling, but we have had an interest in West Africa,” Muhumuza says. “The quality is not as good, and the factories are outdated. We will need to buy new machines and build a new factory.”

But with the knowledge Rwanda has grown at home, Rwanda Mountain Tea is ready to export its success.

“Talk to anyone about tea in Rwanda they will think quality,” Muhumuza says. “We’re in a good space, we need to maximise in terms of production.”