UN Secretary-General, on International Day of Reflection on the Genocide against the .

Guterres, United Nations Secretary-General, on the occasion of the International Day of Reflection on the 1994 Genocide against the Tutsi in Rwanda (7 April 2022). 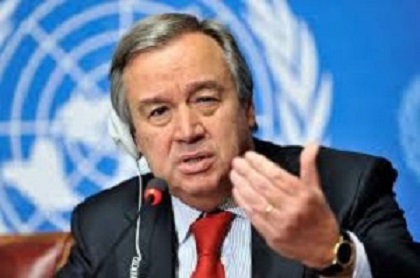 Guterres, United Nations Secretary-General, on the occasion of the International Day of Reflection on the 1994 Genocide against the Tutsi in Rwanda (7 April 2022). Together, we pay tribute to the one million people who were murdered in just 100 days in 1994 – the overwhelming majority Tutsi, but moderate Hutu and others who opposed the genocide too. We honour their memory. We stand in awe of the resilience of the survivors. And we reflect on our failures as an international community. The genocide was neither an accident nor unavoidable. It was deliberate, systematic – and carried out in broad daylight. No one who followed world affairs or watched the news could deny the sickening violence taking place. Yet too few spoke out – and fewer still tried to intervene. Much more could have – and should have – been done. A generation after the events, the stain of shame endures. As we remember the bloodshed 28 years ago, we recognize that we always have a choice. To choose humanity over hatred; compassion over cruelty; courage over complacency; and reconciliation over rage. The principle of the Responsibility to Protect entails that we can no longer stand idle in the face of atrocity crimes. Through my Call to Action and other initiatives, human rights stand firmly at the heart of everything we do. My Special Adviser on the Prevention of Genocide is monitoring developments worldwide for risks of genocide and other atrocity crimes. And I have placed the agenda of prevention at the centre of our work. Today, international criminal justice – though far from perfect – has shown how perpetrators can no longer assume impunity. The remarkable work of the International Criminal Tribunal for Rwanda – the first court in history to convict an individual of genocide – was instrumental in this effort. And it has demonstrated how justice is indispensable for sustainable peace. Rwanda today stands as a powerful testament of the human spirit’s ability to heal even the deepest wounds and emerge from the darkest depths to rebuild a stronger society. After having suffered unspeakable gender-based violence, women today hold 60 percent of parliamentary seats. And Rwanda is the fourth largest contributor to UN peacekeeping operations – risking their own soldiers to spare others the pain they themselves have known. The genocide against the Tutsi raised questions that affect all humankind – fundamental questions about the role of the Security Council, the effectiveness of peacekeeping, the need to end impunity for international crimes, the need to address the roots of violence, and the fragility of civility. We have great tests before us. Today, Ukraine is in flames and old and new conflicts fester in the Middle East, Africa and beyond. The Security Council agrees mostly to disagree – contributing to an environment of perceived impunity for state and non-state actors. Wars are raging, inequalities widening, and poverty growing – and all are breeding grounds of resentment, anxiety, and anger. Meanwhile, we see hate speech – including dehumanizing disinformation, racist tropes, and genocide denial and distortion – proliferating both on- and offline. Today of all days, we must recognize the dangers of intolerance, irrationality, and bigotry in every society. As we look back with remorse – let us look ahead with resolve. Let us commit to be ever vigilant and to never forget. And let us pay meaningful tribute to the Rwandans who perished by building a future of dignity, tolerance, and human rights for all.