DRC – RWANDA: Fatal Shooting Of A DRC Soldier Who Crossed The Rwanda Border in .

Defence attachés accredited to Rwanda witness the circumstances that led to the fatal shooting of a DRC soldier who crossed the rubavu border and opened fire against RDF position. Source RDF 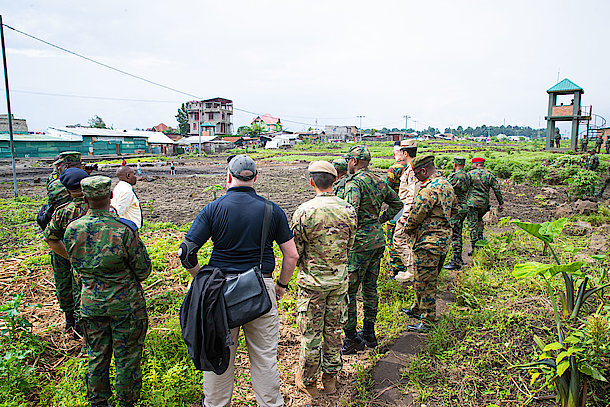 Defences Attachés (DA) accredited to Rwanda today were led to a site visit to witness the circumstances of an incident in which a DRC soldier was shot dead in Rubavu District at ‘Petite Barrière’. The deceased soldier illegally crossed the border to Rwanda and opened fire at Rwanda Defence Force soldiers on guard at Mbugangari, before being shot dead. The incident happened on Saturday, 19 November 2022, at 0100hrs.

According to the RDF Head of International Military Cooperation, Brig Gen Patrick Karuretwa, the visit was arranged by RDF following a request by DAs who wanted to witness and ask questions regarding the incident.

At Rubavu, the Defence Attachés were welcomed by the RDF 3 Division Head of Operations Brig Gen Andrew Nyamvumba who took them to Mbugangari, Rubavu, just few meters to the Rwanda- DRC border.

The DAs were shown how the FARDC soldier crossed with his gun and opened fire targeting RDF soldiers who were positioned on 2 towers just few meters on the border. RDF soldiers responded to the attack, killing the intruder before he could kill or wound anyone, as explained by Brig Gen A Nyamvumba.

“The Defences Attachés are interested in understanding what kind of situation makes it so frequent in these days to have such incidents, because unfortunately this is not the first time, the DAs are coming here to witness such incidents. The question they have been discussing is what kind of orders or atmosphere that keep leading DRC soldiers to cross and conduct such senseless attacks.” said Brig Gen Karuretwa . “We are asking DRC to refrain from such provocative actions” he added.

He further said that initially the DRC claimed that it was not their soldier but later they finally admitted after irrefutable facts were produced to prove the reality.

The Expanded Joint Verification Mechanism (EJVM) was notified to record the facts, conduct independent verifications and arrange the repatriation of the body to the DRC.