RwandAir has big ambitions to connect Africa. But realizing those ambitions has to wait, pending a delayed major investment by Qatar Airways in the airline. By Edward Russell 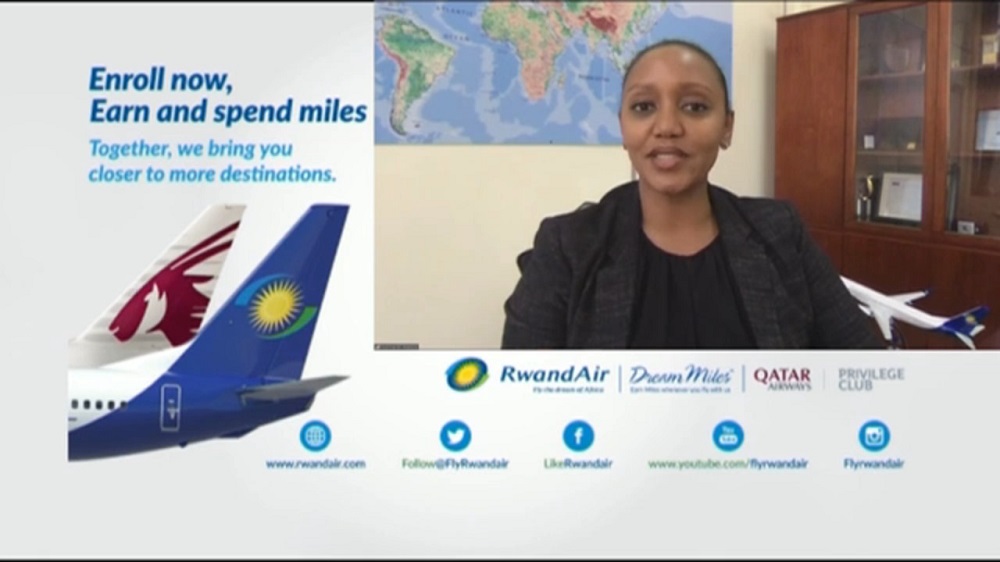 First unveiled in 2020, Qatar Airways plans to buy a 49 percent stake in state-owned RwandAir. That deal, as RwandAir CEO Yvonne Manzi Makolo said last year, will enable the carrier’s growth through numerous joint “commercial initiatives.” The first of which was a codeshare partnership and a loyalty program tie up that launched in December.

Qatar Airways’ planned investment is valued at at least $28 million, or 49 percent of RwandAir’s $57 million in shareholder equity in 2019, according to financial statements submitted to the U.S. Department of Transportation last year.

But RwandAir’s pact with Qatar Airways is still pending with talks at “an advanced stage,” Makolo said at the International Aviation Club in Washington, D.C., on Wednesday. “There’s lots of legal and stuff that’s happening” behind the scenes, she said when asked about the hold up. Makolo added that she “hopes” the deal will be done soon but declined to provide a timeline.

The longer the deal is pending, the longer RwandAir’s ambitious expansion plans must wait. “This joint venture will allow RwandAir to grow into a more robust airline … and further improve connectivity within the continent,” Makolo said. When asked, she said additional aircraft for the airline’s 12-plane strong fleet would come under the partnership with deep-pocketed Qatar Airways.

« This joint venture will allow RwandAir to grow into a more robust airline … and further improve connectivity within the continent, » said Yvonne Makolo, the CEO of RwandAir

A new airport serving Kigali, largely funded by Qatar Airways, is also under construction and expected to open around the middle of the decade.

Makolo also confirmed RwandAir’s interest in joining the Oneworld alliance, of which Qatar Airways is a member. She said the airline was “exploring” joining the global airline confab, in which it would be Oneworld’s second African member after Royal Air Maroc.

Rwanda has ambitions to grow its national carrier into what some liken to the Singapore Airlines of Africa. The land-locked country is centrally located on the continent for air connectivity to its many disparate points. Africa’s largest airlines today, including Ethiopian Airlines, Kenya Airways, and Royal Air Maroc, all operate hubs that are ill located for pan-Africa connectivity.

« We are positioning Kigali as a significant regional hub in the heart of Africa, » Makolo said. This growth stands to improve connectivity as well as benefit RwandAir’s namesake country, she added, citing growth in tourism and conference sectors in Rwanda. RwandAir sees a strong travel recovery, Makolo said, citing pent-up demand. Demand is robust through the historically slower northern winter, she added, echoing the views of executives at many of the globe’s largest airlines, including Emirates and the Lufthansa Group.

State-owned South African Airways received approval Wednesday from the country’s government to hold onto many of its pre-pandemic route authorities despite not using them. The carrier plans to resume flights to Windhoek, Namibia, and Victoria Falls, Zimbabwe, in December after suspending the markets in August 2020, Diio schedules show. However, South African Airways has yet to restore any of its intercontinental routes, including to London or New York.

RwandAir, which resumed nonstop flights to London Heathrow from Kigali in October, plans to increase frequencies on the route to daily from four-times weekly next year, Makolo said. The airline also serves Brussels, Doha, and Dubai outside of Africa.

Passenger traffic in Africa was at 73 percent of 2019 levels in August, according to the latest IATA data. That put the continent’s air travel recovery at the second slowest globally, ahead of only the Asia-Pacific region.

The airline earnings reports are flying in fast and furious. Europe’s Big Three all reported last week, revealing robust profits all around. Some things seem to never change, like IAG’s superior performance relative to Air France-KLM and Lufthansa. It’s Air...

Third quarter earnings season continues, with a long parade of airlines set to report this week. Lufthansa, Air Canada, and Southwest are just a few of note. Last week, American and United were center stage, each describing the changing nature...

Third quarter earnings season is underway, with Delta as usual batting leadoff. For the second straight quarter, its earnings were strong, underscored by another double-digit operating margin. That’s thanks to record revenues, fueled by extraordinarily robust demand — for leisure...