DRC: Tshisekedi tries to win support against Rwanda at the UN

DRC’s President Félix Tshisekedi is struggling to win support for his cause at the UN, to obtain diplomatic condemnation of Rwanda for alleged support of M23 rebels. Will he succeed? By Romain Gras 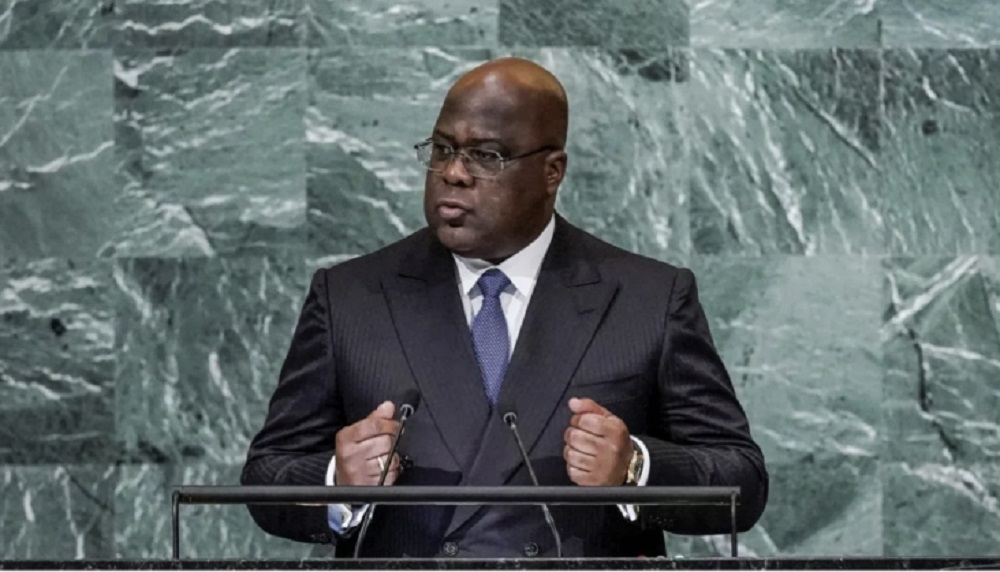 Did the UN Secretary-General Antonio Guterres say too much or not enough? When asked on 18 September about the resources available to the M23 rebel group, Guterres compared it to a « modern army, with heavy equipment that is more sophisticated than that of Monusco ».

However, he refused to take a position regarding Rwandan support for the armed group, saying only « [the M23 rebels] were not born in the forest [and that they came] from somewhere ».

« This doesn’t exactly come as a surprise, » says one Congolese diplomat. « The UN has been saying this for several months. » One of Félix Tshisekedi’s ministers adds: « It is an admission of impotence from the UN. »

The head of state nevertheless reiterated his accusations against Kigali when he spoke at the UN on 20 September. « Rwanda’s involvement and responsibility in the tragedy that my country and compatriots, in the areas occupied by the Rwandan army and its M23 allies, are experiencing is no longer debatable, » he said. Tshisekedi also called on the « United Nations, the African Union, African regional communities and DRC’s partners to no longer heed the shameless denials of the Rwandan authorities.»

Paul Kagame indirectly replied to him when he delivered his speech on 21 September from the same podium. « We must find the political will to finally address the root causes of instability in eastern DRC. The blame game does not solve problems,” said the Rwandan president, who has denied providing any support to the rebels since the beginning of the crisis and in return accuses the Congolese army of collaborating with the Democratic Forces for the Liberation of Rwanda (FDLR).

The FDLR is a group from the one who committed genocide against Tutsi in Rwanda in 1994 and formed from Rwandan refugees in the DRC. Some returned to Rwanda and others with their descendants and supporters, they formed the Democratic Forces for the Liberation of Rwanda.

The international community cautious and divided

Tshisekedi’s speech does not come as a surprise, as he has been saying the same thing for several months now. The president is facing a divided international community in his search for diplomatic support. In this respect, the UN secretary-general’s statement is indicative of the caution that prevails in the face of this crisis that has opposed DRC and Rwanda for several months. Furthermore, Rwanda continues to provide large numbers of troops to UN peacekeeping operations.

According to this document, which was leaked at the beginning of August, « the Rwandan army launched military interventions against Congolese armed groups and positions of the Congolese armed forces ». Kigali again rejected these allegations which have no evidence.

The US, through its embassy in Kinshasa, was among DRC’s first partners to point out « the reported presence of Rwandan forces » alongside the M23. During a visit to Rwanda and DRC in August, US Secretary of State Antony Blinken raised this issue as well as the collaboration between the Congolese army and FDLR.

But Washington is struggling to follow up on this issue on the ground. Mike Hammer, the US ambassador to DRC, has been appointed as special envoy for the Horn of Africa and his replacement, Lucy Tamlyn, has not yet taken up her post. To make matters worse, the US has not had a special envoy to the Great Lakes region since 2020.

Kinshasa, which has hired the services of two US lobbying firms, is still trying to get more outspoken support from the Biden administration. To this end, they are pushing DRC to legally declare the M23 a terrorist group, which would allow them to seek sanctions in case of proven complicity.

According to a close adviser to the Congolese president, the US, like France, has been working behind the scenes over the past few months “to send messages to Rwanda and Uganda”. Paris, which is closely following this affair, is for the moment trying to maintain good relations with both Tshisekedi and Kagame.

The Rwandan president is also keeping France up to date on what is happening in several strategic countries such as the CAR and Mozambique.

The Congolese head of state has sought to increase his number of allies, perhaps to the detriment of a certain strategic coherence. The East African Community (EAC), which DRC joined last March, took lead in a first mediation process with Kenya’s Uhuru Kenyatta.

Even though this led to dialogue with armed groups, from which the M23 is now excluded, Rwanda has never been named as a supporter of these rebels. However, Kigali has been sidelined from the EAC’s joint regional force and its troops will have to content themselves with controlling their shared border with DRC.

Within the sub-region, the balance of power is unclear. Kinshasa suspects Uganda, which has again moved closer to Rwanda, of having sided with Kigali. Moreover, Kenyatta, who had a good relationship with Tshisekedi, is no longer in office.

Relations are much more distant between Kenyatta’s successor, Wiliam Ruto, and Tshisekedi. The other attempt at mediation, which was entrusted to Angola’s President João Lourenço, was slowed down by the August presidential election.

Kinshasa’s historic ally, the Southern African Development Community (SADC), which Tshisekedi chairs, was also asked to take a stand. At the summit held in the Congolese capital last August, the head of state denounced his neighbour’s « cowardly and barbaric aggression ». He also used the conference as an opportunity to thank his Tanzanian, Malawian and South African counterparts, whose troops supply the Monusco intervention brigade (FIB). But again, the summit’s final communiqué did not directly pinpoint Rwanda.

South Africa, a SADC heavyweight, has maintained delicate relations with Rwanda for several years. But Pretoria is also wary of Kinshasa, which has seemed to favour a rapprochement with its EAC neighbours in recent years, to the detriment of other key countries of the Kabila era. The closeness of several former regime officials to South Africa also fuels mistrust between the two countries.

Although Tshisekedi’s entourage privately seems to be angered by the lack of support from the international community, the project to move towards a dialogue as advocated by the UN and other partners seems, at this stage, rather illusory. With the upcoming 2023 presidential election, Tshisekedi may be reluctant to negotiate with Rwanda, as Congolese public opinion might not like him doing so.

Nevertheless, there are still channels for discussion. Some of the Rwandan President’s emissaries travelled to DRC in July. Moreover, France is currently leading mediation talks via the Directorate General of External Security (DGSE). The latter brought together DRC, Uganda and Rwanda’s heads of intelligence services in Paris on 16 September.