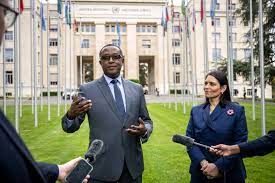 Five weeks after the signing of the Migration and Economic Development Partnership (MEDP) in Kigali and following their meeting in London yesterday, the ministers travelled to Geneva to brief key figures working in the field of international migration.

The Home Secretary and Minister Biruta met with UN Permanent Representatives from Australia, Canada, New Zealand and the United States. Both ministers set out how the partnership of equals agreed between their two countries was facing up to a shared, global challenge and seeking to save lives. They emphasised their belief that further collective engagement was necessary to tackle the global migration crisis.

At both meetings, the Home Secretary and Dr Biruta sought to highlight the UK and Rwanda’s leadership on the international stage in addressing the issue of illegal migration while reinforcing their commitment to working in collaboration with UN agencies in this sphere.

They noted that the UK government’s assessment found Rwanda to be a fundamentally safe and secure country with a proud track record of supporting asylum seekers, including working with the UN Refugee Agency which itself has said the country has a safe and protective environment for refugees.

Furthermore, they emphasised that under our partnership Rwanda will process claims in accordance with the UN Refugee Convention and national and international human rights laws.

They recommitted to maintaining a positive ongoing dialogue with international partners and underlined how the ground-breaking partnership between the two countries will directly address the challenge of illegal migration while saving lives.

Rwanda and the UNHCR have historically partnered to provide safe haven to those in need. Rwanda, with the agency’s support, evacuated African migrants from Libya to safety in Kigali.

This is just one example of Rwanda’s long history of offering those in need safety, dignity, and protection. While the UNHCR are entitled to their views on this partnership, they have no reason to doubt our motivations or our ability to offer sanctuary and opportunity to those seeking it - as we already are doing so for 130,000 refugees.

We welcome the opportunity to discuss this partnership with colleagues in the UNHCR to address their concerns and advance their understanding of what we’re proposing.

All nations and international agencies must work together to address the issue of illegal migration collectively and urgently save lives.

Rwanda and the UK stand together in promoting a new, fairer, more effective global asylum system. Our Migration and Economic Development Partnership will deter criminality, exploitation and abuse, while supporting the humane and respectful treatment of refugees.

It was incredibly useful to discuss the partnership in detail with UN partners in Geneva today and assuage any concerns. We pay tribute to the UNHCR for their tireless efforts to support some of the most vulnerable people around the world.