President Paul Kagame held a remarkable speech yesterday in Kigali about the ongoing problems in the Congolese Kivu’s. Just before that Minister of Foreign Affairs Vincent Biruta had already launched a similar communique. By Adeline Umutoni & Marc Hoogsteyns 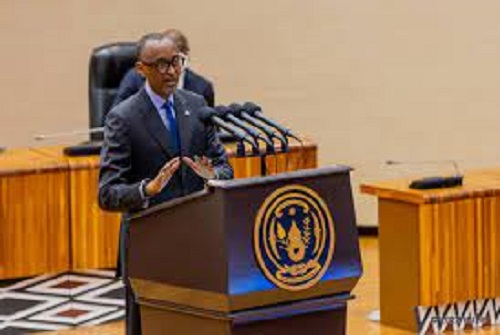 Their reaction clearly shows that Kigali is losing faith in the ongoing peace talks and is fed up completely with the fact that the international community fails to understand the grass roots of this conflict. The urge to act in Kigali is growing,

It is more than significant that the Rwandan President spends more than one hour to transmit his opinion about the mess in the DRC. He didn’t spare his words and didn’t hold back to fire a well-aimed shot across the bow of the international community and the Congolese government.

It shows that Kigali’s believe in the trustworthiness of the Congolese leadership is rock bottom low. The Rwandans are also fed up completely to be categorized as the sole culprits for the total military and political bankruptcy of the Congolese state. Kagame openly accused President Tshisekedi to use this strategy to be able to postpone the upcoming elections in the DRC.

The Rwandan President repeated that his country did everything that was possible to solve this problem diplomatically. But while reading his message between the lines one can only conclude that – for him – a solution can only be found if the grass roots of the problems will be addressed and if all the protagonists involved will have the right to speak.

For Kagame the cliché that Rwanda wants to control the Kivu’s for its minerals is fake as well: he wants to do business with the DRC in a normal and open way so that both countries can benefit from it.

Kigali looks at the opposition against its government as a clearly defined block of Hutu extremists in which the FDLR in the DRC form the military wing and other groups in Europe and in Rwanda the so-called democratic face. While their links with their genocidaire past remain obvious. The fact that the Congolese government inserted the FDLR in its ranks is a torn in his eyes and an open provocation on itself.

Kagame even added that he’s giving this lobby the right to speak openly in Rwanda via several opposition members (such as Victoire Ingabire) and that this problem shall be dealt with accordingly, later on.

Kagame’s attitude and words show clearly that his country can only rely on itself to defend its borders, interests and its development while the outside world keeps on labeling him and his government as dictatorial and criminal. As if they want to turn this into a kind of a self-fulfilling prophecy.

The fact that President Paul Kagame lowered yesterday his normally very reserved shield shows clearly that Kigali has reached its top level of tolerance: Rwanda’s reputation and security are at stake and its leaders are coming bit by bit to the conclusion that they will have to solve this problem themselves.

The RDF is omni-present at the Rwandan side of the border and outclasses the military forces on the other side in discipline, battle weariness and equipment several times. It would only take them a couple of days to set things straight. Nothing will come out of the peace talks in Nairobi unless Kinshasa decides to invite the M23 as well.

The international community already put the entire blame of Congo’s mess on the shoulders of the Rwandan government and that is a big mistake. The international press is following largely this narrative and is making this cliché bigger.

Rwanda is not interested in a war but the public opinion in the country is pushing the government to find a quick and a durable solution. If this solution will be put only in the hands of a bunch of political charlatans in Kinshasa who are accusing each other already to be too tolerant towards the Rwandans and the Tutsi community in Congo nothing will happen as well.

Tutsi bashing and hatred have become mainstream political tools in the Congolese capitol. All the facts and the previous deals are present to stop this ongoing process but if political correctness and courage remain absent Congo will be doomed.