Didi B. Farmer (middle) posing for a picture with a plaque given in honor of her late husband Dr. Paul Farmer on World Health Day on April 7, 2022; Acting Prime Minister Ariel Henry stands on Farmer’s right. Photo via Ariel Henry’s Twitter account 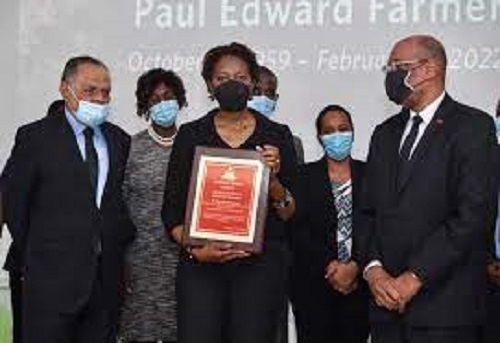 “This shows our gratitude to this eminent doctor whose charitable works continue to benefit thousands of our compatriots,” Henry tweeted after giving a plaque to Didi B. Farmer, the doctor’s widow.

Farmer helped found Partners in Health / Zanmi Lasante hospital, the country’s largest healthcare provider outside of the Haitian government located in Cange, a remote village in Mirebalais. He was known for his decades of extensive work in Haiti dating back to the 1980s when he was a medical student at Harvard.

Farmer died of a sudden cardiac event in his sleep in Rwanda Feb. 21.World Health Day has been celebrated annually on April 7th by the World’s Health Organization (WHO) since 1948. This year’s theme is “our planet, our health.” This year WHO will focus on urgent actions needed to keep humans and the planet healthy and foster a movement to create societies focused on well-being, the organization said on its website