Relations between Doha and Kigali are regulated by agreements and memoranda of understanding covering air services and encouraging and protecting mutual investments as well as economic, commercial, technical, sports, tourism, cultural and business co-operation. By Golf Times 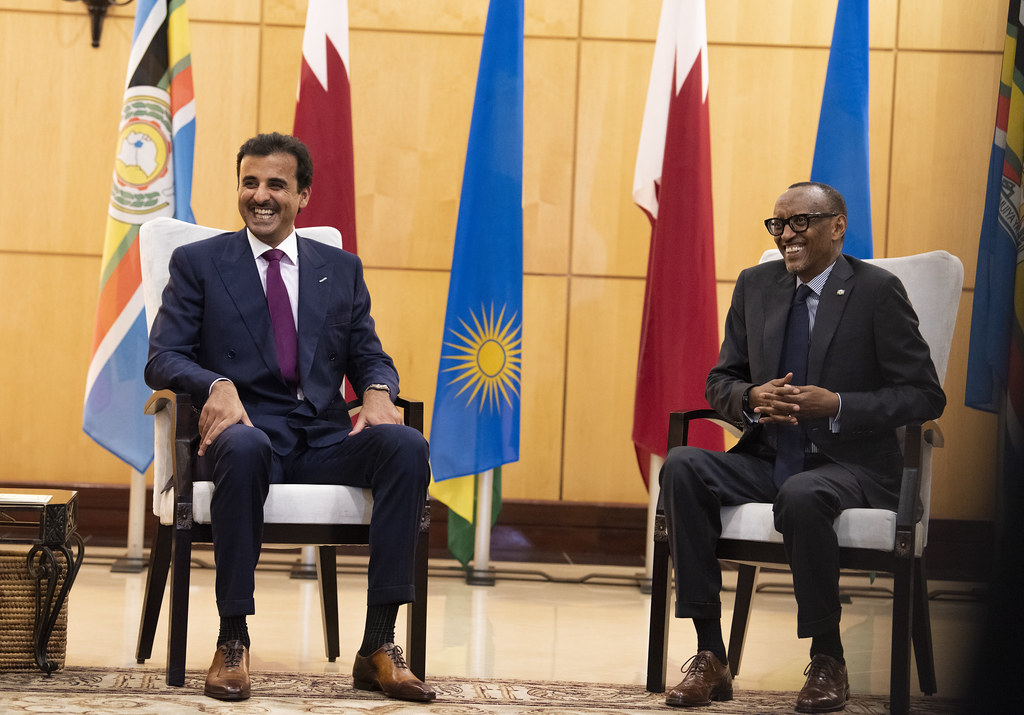 Within the framework of Qatar’s policy and approach of openness, co-operation and participation with various countries and peoples, His Highness the Amir Sheikh Tamim bin Hamad al-Thani arrived yesterday on an official visit to the Republic of Rwanda.

The visit came in response to an invitation extended by Rwandan President Paul Kagame to His Highness to participate the 26th Meeting of the Heads of Government of the Commonwealth of Nations, which will be held in the capital Kigali on June 23-24 at Kigali Convention Center.

His Highness the Amir has participated with 54 countries in the conference under the title ‘Delivering A Common Future: Connecting, Innovating, Transforming.’ The conference takes place every two years. This edition will include four forums for youth, social activists, representatives of civil society, and business leaders.

Qatar and Rwanda have strong and distinguished relations, which were strengthened and further consolidated in recent years by mutual visits between senior officials from both sides, in addition to their meetings on the sidelines of their participation in international conferences, events and United Nations General Assembly sessions to strengthen bilateral relations and co-ordination between the two countries on various issues of concern interest.

Although relations between Qatar and Rwanda are recent, they are ambitious and promising, reflecting the determination of both sides to strengthen and develop them to serve the two friendly countries and peoples. The two countries are constantly working to build an exemplary partnership, and they co-operate on many issues to serve their interests and the interests of others.

Relations between Doha and Kigali are regulated by agreements and memoranda of understanding covering air services and encouraging and protecting mutual investments as well as economic, commercial, technical, sports, tourism, cultural and business co-operation. The two countries also signed an agreement to acquire 60% of the shares of Bugesera International Airport in Rwanda, and Qatar Airways signed two agreements with the Rwandan tourism air transport company and an agreement with the Rwanda Civil Aviation Authority.

There is a memorandum of understanding for defence co-operation between the two countries. Qatar’s Hassad Food Company, which invests in the food sector, signed a memorandum of understanding with the Rwandan government aimed at opening opportunities for co-operation between the two sides and studying investment opportunities in the agricultural and food fields.

Rwanda is located in the centre of Africa, south of the Equator, within the Lake Plateau. It’s a landlocked country and connected with the rest of the world through its neighbours, especially through the ports of Dar es Salaam in Tanzania and Mombasa in Kenya. It has 26,338km2 of land and a population of over 12 million people, 83% of whom live in rural areas.

Rwanda witnessed in early 1990s one of the bloodiest ethnic clashes in history, but it was able to rise and stand on its feet again to build a united and prosperous state, full of hope, success and competitiveness at the regional and global levels.

Regarding this, President Paul Kagame said that they had united their ranks, addressed their differences, invested in human capital through education, provided an enabling environment for foreign investment and laid out a vision for 2000-2021 and another over the next 30 years.

The president also said that they achieved integration in the field of energy, and addressed regional issues while building partnerships and relations with Africa and the rest of the world, adding that they made efforts to draw the largest number of lessons, avoided creating the problems that trouble them, and built on the gains and achievements. This enabled them to watch their country grow, and they hope that Rwanda will become a middle-income country during the next 30 years, the president said.

The Rwandan government has succeeded in fighting corruption and reducing extreme poverty. Healthcare covers 90% of the population. Its economy is one of the fastest growing in the African continent, and its most prominent sectors are textiles, clothing, leather industry, agricultural crops, livestock, timber and minerals, and information and communication technology.

In a short period, Rwanda has been able to become a source of inspiration for many countries and peoples in Africa and the world. Its government is working to transform it from an economy based on low-income agriculture into a knowledge-based economy through encouraging and easing restrictions of foreign investment and allocating incentives to foreign investors.

All sectors are open to foreign investment, and Rwanda also attracts tourists from all over the world because of its natural, rare and picturesque wild life.