DRC: Heartache Awaits Kenya in Democratic Republic of the Congo

Kenya Defence Forces (KDF) soldiers attend a flag presentation ceremony by President William Ruto before their deployment to the DRC as part of the East Africa Community Regional Force (EARDC) at the Embakasi Garrison in Nairobi on November 2, 2022. By Onyango-Obbo 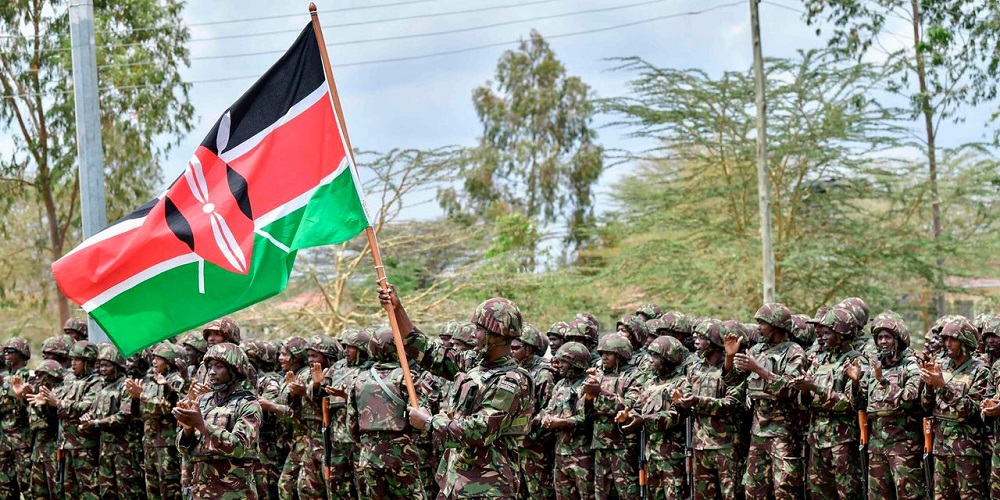 Summary: Kenya clearly is the rookie in DRC. For Kenya and all the other EAC players, part of the problem is that DRC remains too huge. It is 2.345 million square kilometres large. The one thing DRC and Somalia have in common is that most outsiders who have gone in to try and save them have left with their pants on fire. Recently, Kenya sent troops to the eastern Democratic Republic of the Congo (DRC) as part of the East African Community’s effort to bring peace to the long-troubled region.

The fighting in the region flared recently as the March 23 Movement, more commonly known as M23, made military advances, seizing towns and more territories, effectively cutting North Kivu’s capital Goma off from the upper half of the province.

A hapless government in Kinshasa again accused Rwanda of backing the rebels and expelled its ambassador. Rwanda has long denied the accusations.

Of all the EAC countries, Kenya is the stranger to the turmoil in DRC. Rwanda and Uganda were there in 1996/1997 and helped rebels overthrow the thieving autocrat Mobutu Sese Seko.

Rwanda has previously sent its forces across to chase down anti-Kigali rebels and groups behind the 1994 Genocide against the Tutsi. Nearly one million people were slaughtered in the genocide.

Uganda has also been back and forth a couple of times, pursuing remnants of the Joseph Kony-led Lord’s Resistance Army (LRA). In December last year, Uganda sent troops into DRC against Allied Democratic Forces (ADF) jihadist group that was setting off terror bombs in Kampala. They are still there.

Burundi has been there several times: during the war against Mobutu, running after its rebels, and lately, as part of the EAC stabilisation project.

Monusco is one of the UN’s longest-running peacekeeping operations and most definitely its most expensive. According to its critics, it is also one of its most incompetent and corrupt.

When Tanzania went in as part of FIB, the mission gave it a little more leeway to engage militarily than traditional UN peacekeepers.

At that time, the M23 was again on the roll. The Tanzanians became the first UN contingent to fight seriously in the DRC and stalled M23’s progress.

South Sudan, for its part, has not been in DRC since independence. However, its ruling Sudan People’s Liberation Army/Movement (SPLA/M), still a rebel group, joined the fight against Mobutu on the side of Rwanda, Uganda, Ethiopia, Eritrea, Zimbabwe, Zambia, South Africa, and Angola, among others.

Because of that, Khartoum threw its lot behind Mobutu.

The one thing DRC and Somalia have in common is that most outsiders who have gone in to try and save them have left with their pants on fire.

Also, those who have intervened there have lost their shirts, although they might have achieved some of their strategic goals of weakening threats to them, as Rwanda and Uganda have done.

But pacify the place, no. Both countries also have corrupt national armies, although Somalia has cleaned up recently far better than DRC.

And needless to say, DRC is embarrassingly rich in minerals and other resources in ways Somalia can’t even dream of. Beyond that, little else.

The conflict in Somalia has given birth to strong centrifugal forces, which have led to the breakaway of Puntland and Somaliland as semi-autonomous regions that are generally managed better than the original Motherland.

There have been similar attempts in DRC, as with the Katanga Secession in the mid-1960s. It was brutally put down and went underground.

Now, however, with the recent flare-up, if cool heads don’t prevail, we could have the emergence of the Kivu Republic as Congo’s Somaliland or Puntland equivalent.

For Kenya and all the other EAC players, part of the problem is that DRC remains too huge. It is 2.345 million square kilometres large.

It has two time zones; the only country in Africa to use more than one time zone. The rest of the six EAC countries combined are only marginally bigger than it, at 2.467 million square kilometres.

Somalia is a serial rebellion country. It usually has one major rebel group. In recent times, that single bad boy has been Al-Shabaab. In the past, you had minor clan militias, but there was always one big dog.

It is estimated that, by contrast, there are over 120 militias/rebel groups active in the east of DRC. Alliances with each other, and the government, literally change by the day as they attack citizens and pillage.

Somalia’s politics is binary – economic interests and clan security. In Somalia, the groups also tend to hold their positions and negotiate with dry eyes. There is pragmatism there that is often elusive in DRC.

Somalia has many clans, but mainly two ethnic groups, and speaks one language. DRC has 250 ethnic groups and up to 700 distinct languages, and myriad economic interests.

Congo is too complex and big to bite, or to chew and swallow for those who manage to bite it.