RWANDA – EUROPEAN UNION : The EIB And The BRD For African Women Rising Initiative 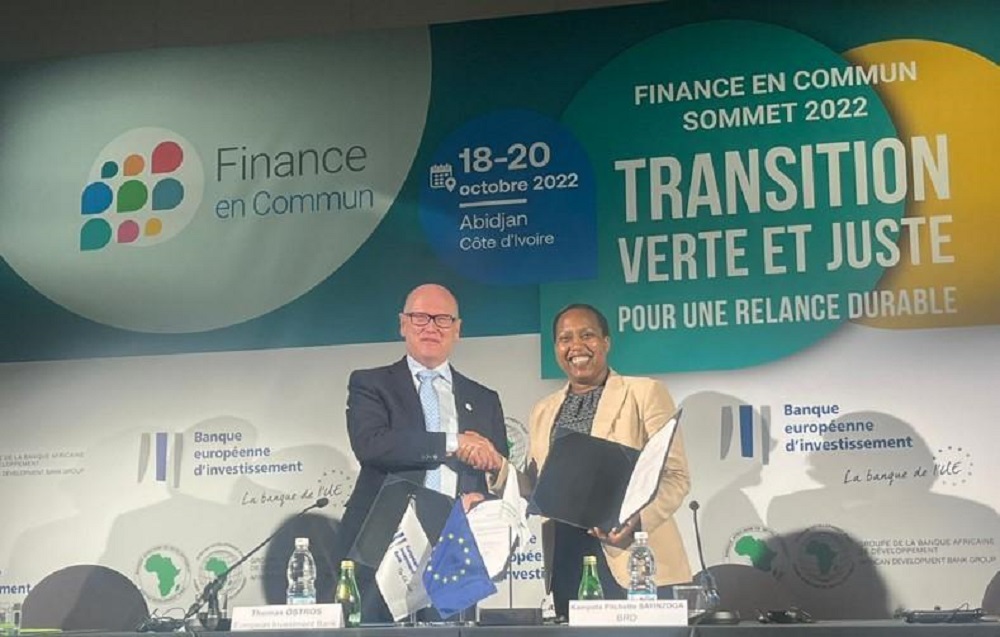 SheInvest has mobilised €2 billion of gender-responsive financing in Africa in less than three years; Additional €2 billion target for SheInvest and geographical scope extended to Asia and Latin America; New cooperation signed with the Development Bank of Rwanda under the African Women Rising Initiative.

Speaking at the Finance in Common Summit in Abidjan, Thomas Östros, Vice-President of the European Investment Bank (EIB), announced the extension of the Bank’s SheInvest initiative to mobilise another €2 billion of gender-responsive investment across Africa, Asia and Latin America. In less than three years since the launch of SheInvest at the end of 2019, the EIB has mobilised a total of €2 billion of investment to boost gender equality and women’s economic empowerment in Africa, together with its partners on the continent and through Team Europe.

EIB Vice-President Thomas Östros (bit.ly/3eOKKXm) said: “I am very proud of what the SheInvest initiative has achieved over the past three years. It has been a game changer in our EIB support for women-led enterprises across Africa. Combining this success with our track record of gender projects in Asia and Latin America as well — ranging from gender-responsive metro projects in India, to access to finance for women entrepreneurs in Brazil — it was a natural next step for us to not only raise the bar in monetary terms, but also geographically expand this initiative.”

SheInvest is complemented by a €2 million technical assistance programme, the African Women Rising Initiative (bit.ly/3CMq9L6), which provides capacity building and mentoring to women entrepreneurs and supports intermediaries in designing financial and non-financial services tailored to their needs in sub-Saharan Africa.

Under this initiative, the EIB and the Development Bank of Rwanda (BRD) are today signing a new cooperation agreement that will enable BRD to increase access to finance for women and develop targeted advisory services for women entrepreneurs in micro to small and medium-sized enterprises in the country. The two banks already jointly financed a €30 million long-term facility (bit.ly/3TdbvDE) at the end of 2021 to help companies impacted by COVID-19.

It has been a game changer in our EIB support for women-led enterprises across Africa BRD Chief Executive Officer Kampeta Sayinzoga said: “At BRD, we have a saying — ‘the best gift you can give a woman, is the gift of choice.’ With the African Women Rising Initiative, we are excited to give women-led enterprises the gift of financial choice, by implementing policies and a strategy that provides them with access to finance, capacity building and mentoring. It is, therefore, our pleasure to join hands with the European Investment Bank in this effort to design and offer financial services tailored to women’s needs in our region. Championing gender equality and equity in financial services is the direction we are taking for the goals we want to achieve for women empowerment.”

Vice-President Östros (bit.ly/3eOKKXm) added: “I am delighted to strengthen our cooperation with the Development Bank of Rwanda to provide much-needed advisory and mentoring services to women entrepreneurs in the country. Investing with a gender lens is essential to build stronger societies and achieve greater development impact.”

Thanks to this new cooperation, the EIB and BRD will jointly define strategic objectives and key performance indicators to mainstream gender equality considerations in the lending and advisory activities of BRD, with the aim to further enhance women’s economic empowerment in Rwanda.

Rolled out in Uganda, Senegal, Côte d’Ivoire, Ghana and Rwanda, the African Women Rising Initiative helps local banks and microfinance institutions in designing, establishing and actively promoting gender-intelligent financial and non-financial products and services better tailored to the needs of women entrepreneurs, with the desired outcome of increased women’s economic empowerment in the selected countries.