The raising of the threat level by the WHO has neighbours on edge amid growing questions over lockdowns and the broader response. By Philippa Croome 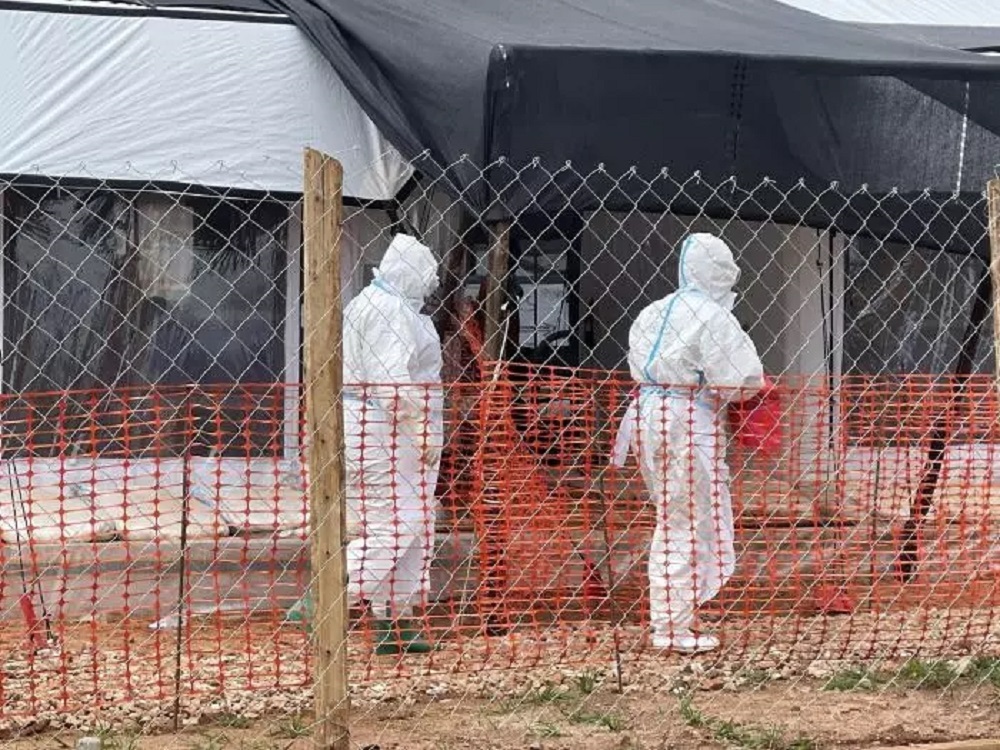 Ugandan health workers responding to Ebola on 6 October. The government initially denied the outbreak, which first surfaced in a rural village in central Mubende district, had reached the capital, Kampala, located in the south of the country.

More than a month after an Ebola outbreak was declared in Uganda, infections continue to climb, and the World Health Organisation has upped its Ebola risk assessment for both the country and wider region since it reached the capital, Kampala.

Rather than Uganda having contained the virus, « the risk can be assessed to be very high at the national level, and high at the regional level, » the WHO said in a 28 October update – a step up in threat level from previous evaluations. It continued to describe the global risk as low.

There were 130 confirmed Ebola cases and 43 deaths by 31 October, according to Uganda’s ministry of health, a case fatality rate of 33%. The lack of a licensed vaccine for the « Sudan » strain present in Uganda and the spread of the outbreak to Kampala have magnified the public health dangers, the WHO warned.

Since the outbreak was declared on 20 September, the highly contagious virus has surfaced in six rural districts clustered in the centre of the country – Mubende, Kassanda, Kagadi, Bunyangabu, Kyegegwa, Wakiso – as well as Kampala, a city of 3.6 million people in the south.

After hopes the initial cases might have been contained, Tedros Adhanom Ghebreyesus, the WHO director-general, said he remained concerned about the potential for future spread: « there may be more chains of transmission and more contacts than we know about in the affected communities ».

The government initially denied last week that there were infections in Kampala, but has since acknowledged 17 cases have been detected – 13 of them linked to a single family, and six of those children attending three local schools. The education ministry has kept schools open, but has banned graduation parties for primary and secondary school students.

Underlining the alarm over the spread of the haemorrhagic fever, Tedros tweeted last week that tackling Ebola in urban areas is complex, requiring « coordinated & sustained efforts to interrupt transmission ».

The number of contacts listed for follow-up has ballooned to over 2,100 as of 31 October, with reports of logistical failures – including a lack of vehicles – hampering tracing.

Uganda’s six neighbouring countries – Burundi, the Democratic Republic of Congo (DRC), Kenya, Rwanda, South Sudan, and Tanzania – have all stepped up their readiness preparations, the WHO noted.

The index case in Kampala was a man who had escaped from an isolation centre in Mubende in September to seek treatment from a traditional healer, and then travelled to his relatives in the capital. Rather than reporting his condition, his family hid him, his true identity only becoming known after his death.

That suggests a lack of trust in the authorities by some citizens, according to Samuel Oledo, president of the Uganda Medical Association (UMA). « It is catastrophic that right now, [some] people are not even reporting cases, » he told a local radio programme.

The government locked down the two hardest-hit central districts – Mubende and Kasanda – for 21 days on 15 October. The measures have included an overnight curfew, closure of places of worship and entertainment, and movement restrictions. A mobile laboratory has also been deployed in Mubende.

There have been calls for similarly stringent measures for the congested capital. « The earlier we lockdown Kampala the better, » said Oledo. « Ugandans are still taking [about Ebola] as something so minor. »

There has also been criticism that President Yoweri Museveni has downplayed the seriousness of the outbreak – a marked contrast to COVID-19, when Uganda imposed one of the world’s longest lasting lockdowns.

But Ainebyoona, the health ministry spokesperson, said a lockdown would be premature. « Scientifically, it’s not necessary, » he added. « It depends on the epidemiological trends, and also [that] we follow up on contact tracing. Although Kampala residents are worried by Ebola, a lockdown would be unpopular – especially as people are already struggling with rising fuel and food costs. With memory still fresh of the damage caused to the economy by COVID-19, there has been political and public pushback over suggestions of renewed restrictions.

« We are still suffering from the effects of the lockdown of COVID-19, » Musoke Thaddeus Nagenda, the chair of the Kampala City Traders Association, told The Daily Monitor newspaper last week. A lockdown, he said, would be « very unfortunate« ». Lack of resources

Uganda has coped with multiple Ebola outbreaks, including a case of the Sudan strain in 2000 that claimed more than 200 lives. The government says its priority is financial support for its $18 million response plan.

It’s a call echoed by WHO executive director Mike Ryan. « We need more scale-up. We need more support for that scale-up, » he told a media briefing in Geneva on 12 October.

But Uganda’s underfunded public health system was already struggling before the increased pressure of the Ebola outbreak, and by the beginning of November there was little evidence of a scaled-up response thus far, at least in Kampala.

« Of course, we need more health workers; we are recruiting, » said Ainebyoona from the health ministry, adding that shortages of personal protective equipment were almost inevitable: « PPE – there will never be enough – because these are consumables, they get depleted. »

Kampala’s main isolation unit is adjacent to its main referral hospital Mulago, which the ministry says is currently housing 50 contacts from the Kampala and Wakiso districts who will now be moved to create space for the admission of suspected and confirmed cases.

Within the next four weeks, the ministry said, it planned to build another facility at Mulago’s adjoining sports field that will have 64 beds, boosting the capacity to care for 351 confirmed cases in the capital.

The government is also struggling to protect and compensate health workers. So far, 15 confirmed Ebola cases have been among health staff, with six deaths. The UMA has been pushing for frontline workers to receive hazard pay, and medical interns have threatened to strike without better support.

Private clinics are typically the preferred destination for patients before turning to a public facility. Although they are connected to the national health surveillance system, not all are equipped to meet Infection Prevention and Control (IPC) best practice standards. « We are going to do an assessment, » said Ainebyoona. « Those who are short of IPC requirements will be closed. »

Classic public health measures to control epidemics – isolating patients and quarantining their contacts – can be effective, but they are difficult to implement. Vaccines, however, could be a game-changer.

Development work has been slower on the Sudan version, but three candidate vaccines exist – produced by Merck, the non-profit Sabin Vaccine Institute, and Oxford University.

The three experimental vaccines will be tested from next week, with shots given to 150 people, according to Uganda’s health minister, Jane Ruth Aceng.

Uganda’s outbreak is so far the eighth largest on record, amid fears gaps in contact tracing may see its further spread. Neighbouring countries are heightening border surveillance in a region where cross-border movement is key to many people’s livelihoods. Kenya, Rwanda, and Tanzania are among those now screening all arrivals from Uganda at official checkpoints.