Uganda has reported nine more Ebola cases in the capital Kampala, bringing the total number of known infections to 14 in the last two days, the health minister said on Monday. Reuters 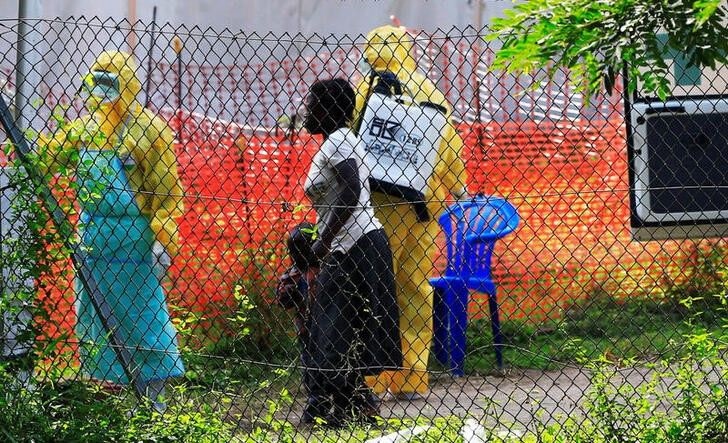 A woman and her child arrive for ebola related investigation at the health facility at the Bwera general hospital near the border with the Democratic Republic of Congo in Bwera, Uganda, June 14, 2019. REUTERS/James Akena/File Photo

The outbreak began in September in a rural part of central Uganda. It spread earlier this month to Kampala, a city of more than 1.6 million people, by a man who had come from the Kassanda district to seek medical treatment and later died.

Seven of the nine who tested positive on Sunday are family members of the man who died and are from the Kampala neighbourhood of Masanafu, Health Minister Jane Ruth Aceng said in a tweet.

Another is a health worker who treated the man and his wife in a private clinic, she said.

« Fellow Ugandans, let’s be vigilant. Report yourself if you have had contact or know of a person who has had contact, » Aceng said in her tweet.

Health ministry spokesperson Emmanuel Ainebyoona said all of the patients in Kampala were in isolation when they became symptomatic, reducing any chance of them passing on the virus.

Ebola spreads through contact with the bodily fluids of an infected person.

There have been more than 90 confirmed and probable cases in Uganda since the start of the outbreak, including at least 44 deaths, according to statements by the health ministry and the World Health Organization.

The virus that is circulating in Uganda is the Sudan strain of Ebola, for which there is no proven vaccine, unlike the more common Zaire strain that spread during recent outbreaks in neighbouring Democratic Republic of Congo.

Ebola generally kills about half of the people it infects. Its symptoms include intense weakness, muscle pain, headaches and a sore throat, vomiting and diarrhoea.

Reporting by Kanjyik Ghosh in Bengaluru and Aaron Ross in Nairobi; Editing by Tom Hogue, William Maclean, and Simon Cameron-Moore