The follow, is the Communiqué of The 42nd Ordinary Summit of SADC Heads of State and Government of 17 Aug 2022 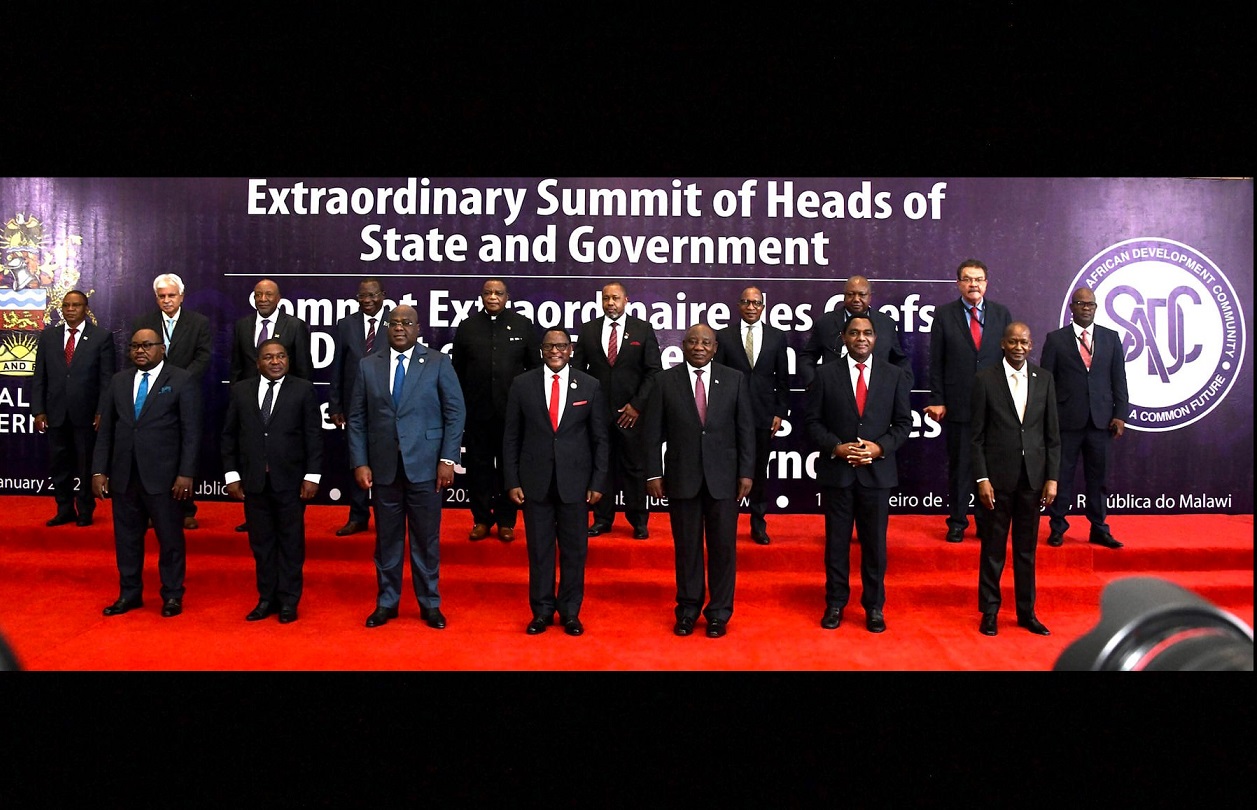 1. The 42nd Ordinary Summit of the Heads of State and Government of the Southern African Development Community (SADC) was held on 17th August 2022, in Kinshasa, the Capital City of the Democratic Republic of the Congo.

2. Summit was attended by the following Heads of State and Government and/or their representatives:

6. Summit received a report of the Outgoing Chairperson of the Organ on Politics, Defence and Security Cooperation, H.E. Cyril Matamela Ramaphosa, President of the Republic of South Africa, and commended him for his outstanding leadership and continued efforts to address peace and security threats during the year, notwithstanding the challenges posed by COVID-19.

7. Summit received a progress report from the SADC Facilitator to the Kingdom of Lesotho, H.E. Matamela Cyril Ramaphosa on the implementation of SADC decisions in the Kingdom of Lesotho and while noting the progress made, it urged the Government to expedite completion of the ongoing reforms, and to continue with peace, transitional justice and reconciliation process to engender national unity, and bring about national healing and cohesion.

8. Summit commended the SADC Facilitator and the Facilitation Team for the excellent leadership and role in supporting the Government and people of the Kingdom of Lesotho in the process of the multi-stakeholder national dialogue and the adoption of the comprehensive reforms proposals.

9. Summit approved the establishment of an oversight committee made up of the SADC Panel of Elders (PoE) and the Mediation Reference Group (MRG) to ensure continuity and oversight on the implementation of reforms in the Kingdom of Lesotho.

10. Summit received updates on the Security Situation in Cabo Delgado Province, in the northern part of the Republic of Mozambique, and approved the extension of the SADC Mission in Mozambique (SAMIM) and its related processes.

11. Summit commended SAMIM Personnel Contributing Countries (PCCs) for their solidarity and sacrifice in supporting the Mission, and expressed condolences to the governments and families of the nine (9) deceased SAMIM personnel who died in the theatre of operations.

12. Summit expressed concern and solidarity on the latest security developments in eastern DRC, and mandated the Chairperson of the Ministerial Committee of the Organ, supported by the Organ Troika FIB Troop Contributing Countries (TCCs), to engage the UN Secretary General on the margins of the UN General Assembly in September 2022, to explore all avenues to support efforts towards improving the security situation.

13. Summit welcomed a brief report presented by the Government of the Kingdom of Eswatini, regarding the security situation in the country, and while condemning the violence, it mandated the Chairperson of the Organ to convene an Extra-ordinary Summit of the Organ Troika plus Eswatini, at a date to be determined, aimed at finding a peaceful and lasting solution to the security challenges facing the country.

14. Summit expressed concern on the continued Maritime security threats affecting the Region’s development aspirations, in particular, those emerging in the western part of the Indian Ocean. In this regard, Summit urged Member States to expedite the implementation of the SADC Maritime Integrated Strategy and its Action Plan.

15. Summit welcomed the establishment of the SADC Regional Counter-Terrorism Centre (SADC-RCTC) in the United Republic of Tanzania (URT), as an institution that coordinates counter terrorism activities in the Region, and urged Member States to strengthen cooperation and information sharing on terrorism, radicalism and violent extremism.

16. Summit applauded the successful general elections in the Republic of Zambia in August 2021, and the peaceful transition of power, and noted the readiness of the Republic of Angola and the Kingdom of Lesotho to hold their general and national assembly elections on 24th August 2022 and 7th October 2022, respectively, and wished the two (2) Member States peaceful elections.

17. Summit also received a progress report on the implementation of the Mechanism in Honour of SADC Founders, and in recognition of their legacy and contribution to SADC, it handed over medals to the family representatives of the nine (9) respective Founders of SADC, and mandated the Chairperson of the Organ to coordinate the process leading up to the unveiling of the Statue in memory of the late President Julius Kambarage Nyerere at the African Union (AU) headquarters.

18. Summit approved the appointment of H.E. Dr. Jakaya Mrisho Kikwete, former President of the United Republic of Tanzania and H.E. Paramasivum Pillay B. VYAPOORY, former Vice President of the Republic of Mauritius as the Chairperson and Deputy Chairperson of the Panel of Elders (POE), respectively, a SADC structure with the mandate to facilitate the prevention, management and resolution of significant inter and intra-State conflicts, and is supported by the Mediation Reference Group (MRG).

19. Summit expressed its dissatisfaction against the continent being targeted for unilateral and punitive measures through the ‘Countering Malign Russian Activities in Africa Act that was recently adopted by the United States House of Representatives and reaffirmed its principled position of Non-Alignment to any conflicts outside the Continent, and directed that the matter be included in the agenda of the African Union.

20. Summit received reports on the status of the implementation of the Industrialisation Strategy and Roadmap; and the socio-economic situation in the Region including regional economic performance; regional food and nutrition security; gender and development; status of health in the region; and disaster risk management.

21. Summit noted progress on the implementation of the theme of the 41st SADC Summit of Heads of State and Government titled: “Bolstering Productive Capacities in the Face of COVID 19 Pandemic for Inclusive, Sustainable Economic and Industrial Transformation” and commended the Outgoing Chairperson of SADC, H.E. Dr Lazarus McCarthy Chakwera, President of the Republic of Malawi, in delivering on the key areas of the theme during his tenure.

22. Summit endorsed a theme of the 42nd SADC Summit of Heads of State and Government, titled “Promoting Industrialization through, Agro-Processing, Mineral Beneficiation, and Regional Value Chains for Inclusive and Resilient Economic Growth’’ The theme takes into account the current operating environment in the Region and the urgent need to enhance the roll out of SADC industrialization and market integration programmes as contained in the RISDP (2020-2030).

24. Summit adopted the Memorandum of Agreement amongst the Southern African Development Community Member States for the Establishment of SADC Humanitarian and Emergency Operations Centre and referred it to the Ministers Responsible for Disaster Risk Management for signature.

25. Summit adopted and signed the Protocol against Trafficking in Persons, to provide a framework of cooperation between Member States in combating trafficking in persons and associated transnational organised and cross-border crimes in the Region.

26. Summit approved the appointment of Ms. Angele Makombo N’Tumba, a citizen of the Democratic Republic of the Congo, as the new SADC Deputy Executive Secretary for Regional Integration.

27. Summit commended the outgoing SADC Deputy Executive Secretary for Regional Integration, Dr Thembinkosi Mhlongo who is a South African national, for having served the Secretariat professionally, diligently and with a high level of competence.

28. Summit extended its appreciation to the Government and people of the Democratic Republic of the Congo, for a successful 42nd SADC Summit of Heads of State and Government.

30. Summit noted that the next Summit will be held at a venue and date still to be determined, after consultation with the next SADC Chairperson.