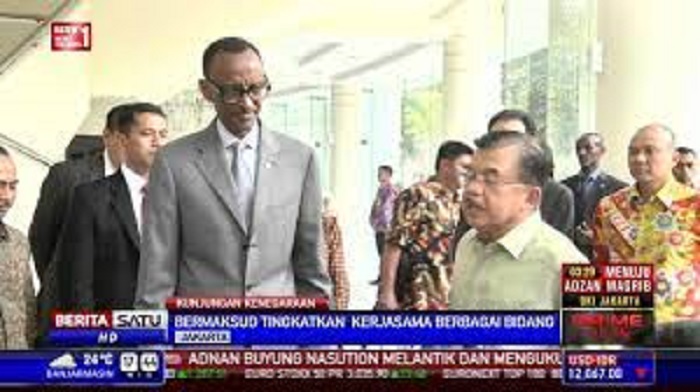 « We plan to improve our existing cooperation and forge new ties, particularly in trade and investment, » Kagame said on Friday, as quoted by tribunnews.com. Friday’ s meeting was Kagame’ s first visit to Indonesia since he took office in 2000.

Kagame and Kalla met for approximately 15 minutes, with Kalla remarking that Indonesia could learn from Rwanda in terms of conflict management and how to effectively rebuild from conflict.

Rwanda endured a brutal civil war in 1994, when the rival Tutsi and Hutu ethnic groups clashed following the death in a plane crash of former Rwandan president Juvenal Habyarimana. During the conflict, members of the Hutu tribe notoriously targeted the Tutsi population in an act of genocide that left between 800,000 and 1 million Tutsis dead.

After the genocide, Rwandan troops participated in the neighboring Congo civil war, which ravaged the region from 1996 to 2003.

« Rwanda is a country synonymous with conflict, but they have shown that they could recover from this trauma. We can learn from how they picked up the pieces after the conflict and moved forward,» Kalla said.

Kalla added that Indonesia planned to strengthen ties with East African nations, such as Rwanda, which would involve more cultural exchanges, as well as assistance in education.