Humanitarian workers on the ground tell theGrio that the treatment of African migrants at the border is part of a pattern of racist conduct that extends beyond the June 24 tragedy. By Gerren Keith Gaynor 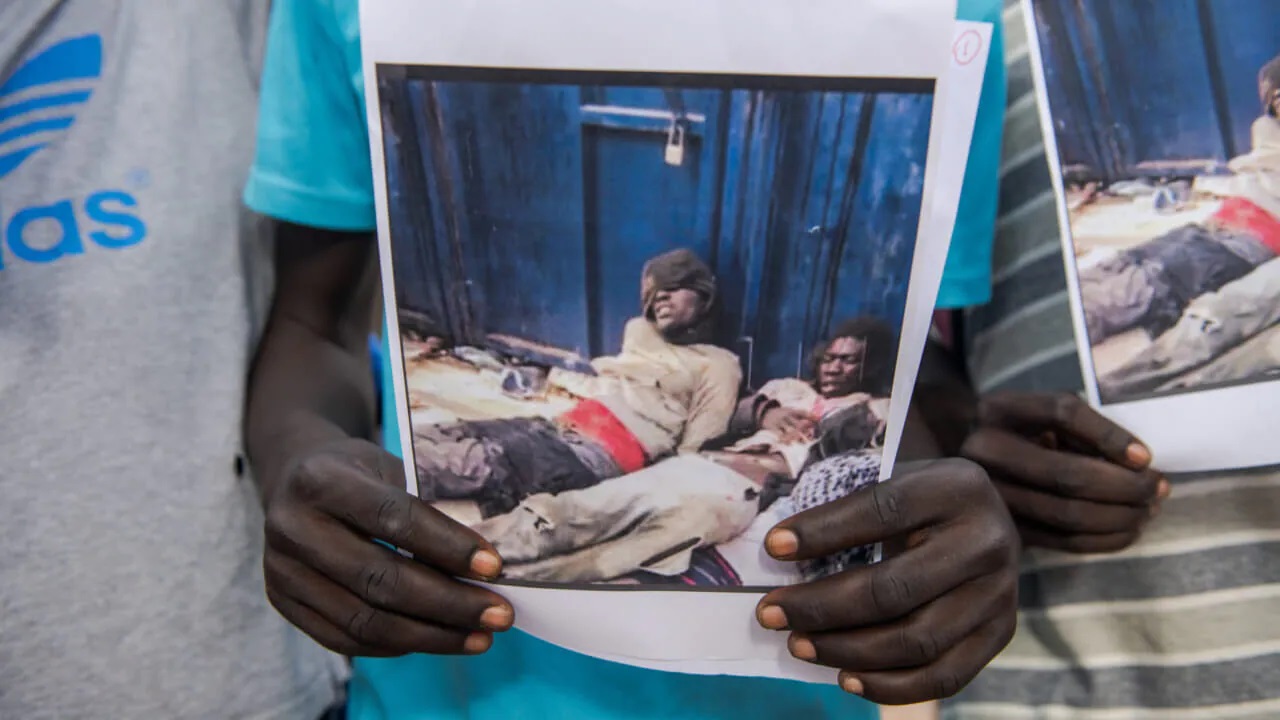 The deaths of at least two dozen African migrants at the Moroccan-Spanish border have rocked the international community, giving way to protests denouncing global racial discrimination against Black migrants writ large and sparking calls for a human rights investigation.

A protester holds images of the violence other immigrants suffered when they arrived at the border between Spain and Morocco. Dozens of people gathered at the Plaza de España in the city of Melilla to demand the action of the security forces of both countries in the massive entry attempt by hundreds of migrants, mainly from sub-Saharan Africa. (Photo by Israel Fuguemann/SOPA Images/LightRocket via Getty Images)

According to BBC News, between 1,500 and 2,000 African migrants were attempting to cross the border from northern Africa into the Spanish enclave, Melilla, which is one of only two land borders between Africa and Europe. A stampede caused many to be crushed, while others fell to their deaths from the top of a metal fence. While Moroccan authorities have reported 23 deaths, Walking Borders, a non-governmental organization that has been monitoring the borders of Morocco, Spain and Algeria since 2002, told theGrio that they counted at least 37 bodies at one hospital, and two other bodies in another, bringing their death toll to at least 39. Walking Borders defends the rights of migrants and provides them with humanitarian assistance, with a particular focus on protecting women and children.

Helena Maleno Garzón, a journalist and researcher who works for Walking Borders, said both Moroccan and Spanish authorities are responsible for the deaths of the African migrants. Most migrants travel from sub-Saharan African countries like Cameroon, Senegal and Ivory Coast, she said. However, in the past two years, there has been an increase in the number of migrants from Sudan.

Normally, Sudanese migrants cross into Europe from Libya, but because of Libya’s years-long civil war, many began traveling through Algeria and Morocco. Some migrants from Sudan who did attempt to travel through Libya were shot or faced other forms of violence.

Garzón said the recent migrant deaths were at the hands of Moroccan authorities “in coordination with Spanish authorities.” She cited an agreement that was made between Morocco and Spain to close the border and to ensure that Moroccan officials got tougher at guarding against migrant crossings.

A picture taken on June 26, 2022, shows a member of the Moroccan security forces on the border fence separating Morocco from Spain’s North African Melilla enclave, near Nador in Morocco. – A massive attempt by migrants to storm the barrier between Morocco and the Spanish enclave of Melilla resulted in “unprecedented violence” that killed at least 23 sub-Saharan Africans and has sparked fears of worse to come. (Photo by FADEL SENNA / AFP) (Photo by FADEL SENNA/AFP via Getty Images)

The uptick of African migrants fleeing war and poverty at home, and attempting to enter Europe for a better life, has been an ongoing point of tension in the region. Garzón told theGrio that the treatment of African migrants at the border is part of a pattern of racist conduct that extends beyond the June 24 tragedy. Border authorities do not provide medical and humanitarian assistance to Africans, who often risk their lives traveling by boat. By the time they reach land, and eventually the border, migrants are often malnourished and sick.

What’s worse, she said, is that Walking Borders found that last year, 4,400 people died at sea without receiving assistance from Moroccan or Spanish authorities. This is a more than 100% increase in such deaths from 2020, according to Walking Borders. Garzón empathically said the refusal to assist migrants is “because they are Black.”

TheGrio was provided data compiled by the organization for victims’ families seeking answers about their loved ones who have died or gone missing while attempting to seek refuge at the Euro-African border. The vast majority of deaths occur at sea, where most bodies disappear without a trace. If migrants are lucky enough to survive the dangerous journey at sea, they are subsequently subjected to harassment and abuse.

María González Rollán, who also works at Walking Borders, told theGrio that during the last three months, African migrants have suffered “arrest campaigns, deportations [and] raids on the camps.”

In addition to a lack of access to medicine and health care, Rollán said that camps have been burned down, migrants’ belongings have been looted, and there continues to be “meager food supplies and little drinking water available.”

« The extreme violence exerted on the migrant communities was what led to the at least 37 deaths, » Rollán told theGrio. 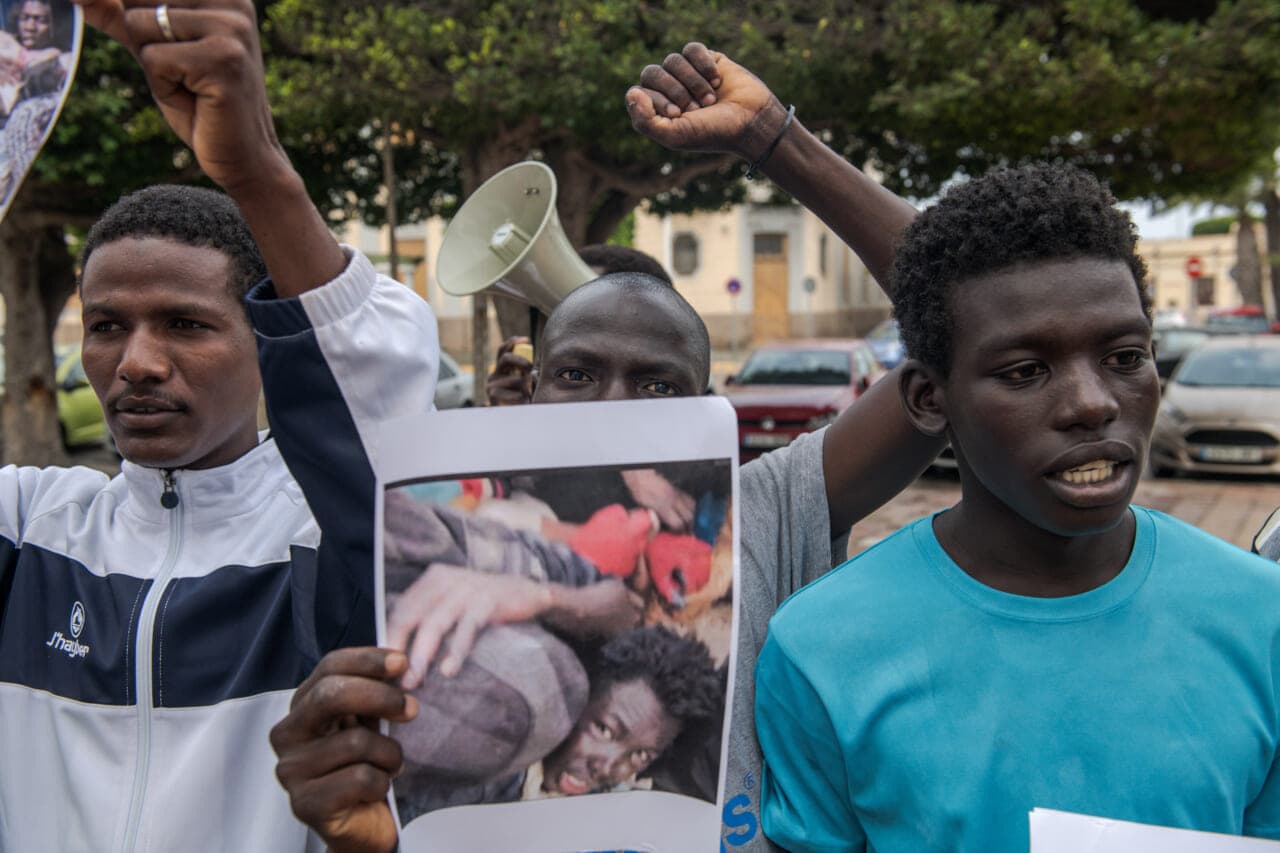 A protester holds images of the violence other immigrants suffered when they arrived at the border between Spain and Morocco. (Photo by Israel Fuguemann/SOPA Images/LightRocket via Getty Images)

What’s more, Walking Borders officials said that because of the humanitarian work they provide to migrants in the region, they have been harassed, abused, and criminalized in a tribunal (a form of court).

« We are criminalized by the Spanish authorities and Moroccan authorities, » said Garzón. She said she was once placed in a Moroccan tribunal for calling a rescue service to help migrants at sea. They accused her of being a trafficker.

Garzón said she and her colleagues are often followed, and that authorities have beaten her, entered her home and taken her documents. « They tried to stop our work, » she told theGrio. « I am very known in Europe because of my work and Walking Borders’ work. »

Garzón said she would like to see the borders abolished.

In response to what happened at the border, the United Nations’ Committee on Migrant Workers called on both Moroccan and Spanish officials to launch « immediate and thorough investigations and to hold those responsible to account. »

Abraham Paulos, deputy director of Black Alliance for Just Immigration (BAJI), called the incident an « international tragedy. » He told theGrio that if the African migrants at the Morocco-Spain border were Ukrainians or « blue-eyed » people, there wouldn’t have been such a death toll.

Paulos said the unwillingness to consider Black migrants as asylum or refugee seekers – regardless of whether they are seeking help due to persecution at home for being a part of a particular ethnic group, political instability, violence, or even climate change – is emblematic of a systemic problem with the international refugee regime.

In contrast to what African migrants have experienced at the Spanish border, for example, Spain has welcomed about 110,000 refugees from Ukraine amid its war against Russia’s invasion.

« If a Ukrainian can get refugee status, there’s no reason why a person from [countries like] Haiti or the Democratic Republic of the Congo, which are going through a lot of instabilities, can’t get it, » said Paulos.

He noted that Europe has essentially run out of « interest in keeping Black bodies alive and giving them safe passage.»

Migration is « a part of human mobility, » said Paulos, and yet Black migrants are finding difficulty seeking refuge, whether it be in Europe or the United States. The U.S. had its own controversial incident with Black migrants at the border of Del Rio, Texas and Mexico in which Haitian migrants were seen being mishandled by U.S. Border Patrol agents. An investigation into the matter by the Department of Homeland Security is still ongoing. 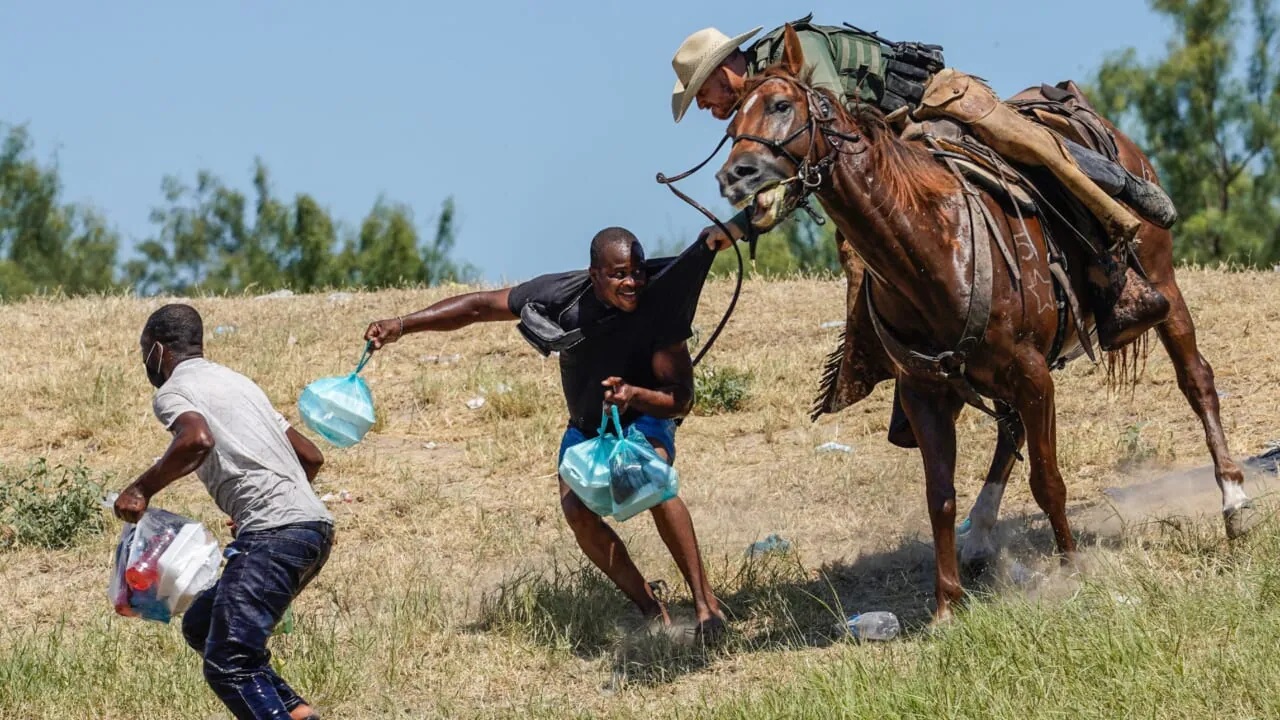 A United States Border Patrol agent on horseback tries to stop a Haitian migrant from entering an encampment on the banks of the Rio Grande near the Acuna Del Rio International Bridge in Del Rio, Texas on September 19, 2021. (Photo by PAUL RATJE/AFP via Getty Images)

Black elected officials and advocacy groups, including BAJI, have been vocal about the United States’ immigration system, which they have long argued discriminates against Black and African migrants when it comes to the enforcement of deportation policies.

TheGrio reached out to the U.S. State Department and the office of House Foreign Committee chairman, U.S. Rep. Gregory Meeks, about the African migrant deaths at the Morocco-Spain border, but had not received a comment by the time of publication.

Paulos noted, « The U.S. has always had an issue with being involved in international stories unless they’re [about] white people. »

« Black people are on the move as we always have been, » said Paulos. Emphasizing the « shifting of migration routes » of Black migrants across the globe, he added, « (By) ignoring it or not diving into the issue, there will always be domestic consequences to that. »