Zimbabwe says it’s working with Rwanda to extradite suspected genocide criminals believed to be in the country. Simon WOHLFAHRT / AFP 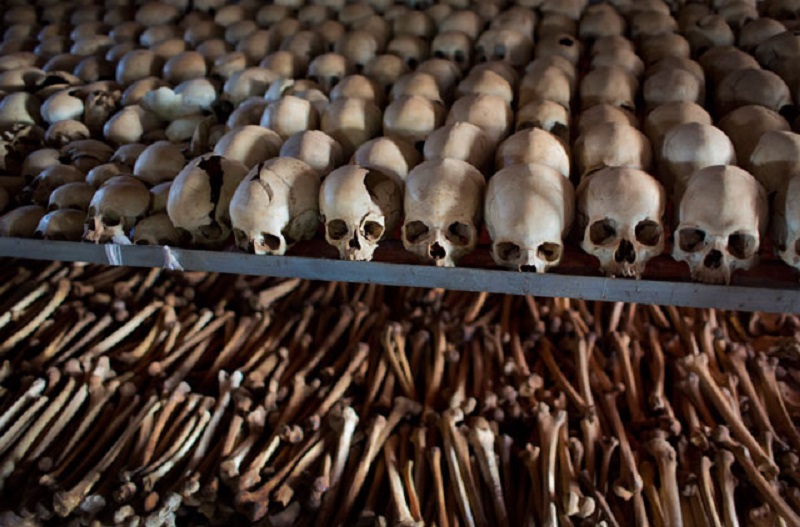 The foreign affairs ministry says Zimbabwe complied with international treaties in the hunting down of Rwandan war criminals.

The Zimbabwean government said it was working closely with Rwanda to hunt down and extradite several alleged fugitives of the Rwandan genocide believed to be in the country.

This was revealed by Zimbabwe’s ministry of foreign affairs a week after the tracking down of suspected Rwandese genocide fugitive Potrais Mpiranya’s remains to a 2006 grave in Harare buried under the name « Ndume Sambao ».

Mpiranya’s remains were discovered by a United Nations (UN) body that handled outstanding war crimes cases for Rwanda and Yugoslavia.

In a statement, Zimbabwe’s foreign affairs minister Fredrick Shava said the country was processing numerous requests from Rwandan president Paul Kagame’s government to extradite suspects believed to be in Zimbabwe.

« We are not only cooperating and assisting the UN mechanism, but we are also assisting Rwanda bilaterally and requests for extradition of some fugitives allegedly believed to be in Zimbabwe are at various stages of processing, » he said.

Last year, Zimbabwe and Rwanda signed a memorandum of understanding (MOU) on legal mutual assistance on criminal matters and cooperation in the field of prisons/correctional services.

The MOU meant that Rwandese refugees that had been in Zimbabwe before 1999, as per a UN resolution, should be declared illegal immigrants because they fled soon after the genocide and some were wanted for war crimes.

The genocide started on 6 April 1994 when a plane carrying Rwandan President Juvenal Habyarimana, a Hutu, was shot down. Under the cover of war, Hutu extremists launched their plans to destroy the entire Tutsi civilian population. In about 100 days, an estimated 400 000 to 800 000 mainly Tutsi were killed. Some estimates place the figure above a million.

The genocide resulted in hundreds of thousands fleeing across Africa and beyond.

However, it’s the genocide enforcers who were being targeted for a return home to face their alleged crimes.

In Zimbabwe, Rwandese refugees had, on numerous occasions, pleaded not to be deported. They feared persecution under Paul Kagame’s government because they were regarded as critics of it.

There are officially 658 Rwandan refugees in Zimbabwe housed at the Tongogara refugee camp. But there’s also a Rwandan community outside the camp, from which most investigations were carried out in tracking Mpiranya.

While following Mpiranya’s trail, the UN investigators said the « flight from Rwanda » by genocide enablers and actors saw many of them leaving the country after the Rwandan Patriotic Front, led by Kagame, came into power.

The fugitives found a haven in the Democratic Republic of Congo (DRC), Central African Republic (CAR), and Cameroon. However, when Théoneste Bagosora, a military commander and genocide war criminal was arrested in Cameroon, many left because their safety was not guaranteed.

The only safe place for the war criminals was the DRC in 1998 when a second war broke out there. They served as soldiers of fortune, pushing for the fall of Laurent-Désiré Kabila.

The UN investigators said Mpiranya and numerous others joined the Zimbabwe Defence Force (ZDF) who were in the DRC to defend Kabila’s government.

They said Mpirinya led a military unit called Horizon Brigade which, “operated extensively with the ZDF in the DRC. Deployed together and involved in violent battles”.

In its report, UN investigators said Mpiranya and many other fugitives’ arrival in Zimbabwe were facilitated by senior military and government officials.

« Zimbabwean officials facilitated his entry into Zimbabwe and Mpiranya facilitated the safe passage of his closest associates, » the investigators said.

« The countries where he lived from 1994 to 2006 had the responsibility to arrest him, but they didn’t, » said Ibuka’s Jean Damascene Kalinda.

Numerous reports after the discovery of Mpirinya’s remains had « painted » Zimbabwe in a bad light, the foreign ministry said.

« The government of Zimbabwe wants to put on record that it met all its obligations under international laws.

« Zimbabwe fully cooperated with the UN residual mechanism in its investigations of the Rwandese fugitive who was indicted by the International Criminal Tribunal for his role in the 1994 Rwandan genocide, » Shava said.

He also said that the UN prosecutor’s office was not allowed to « come, exhume and take samples of a deceased person buried in Zimbabwe without government authority ».